The innovative car charger that’s the solution to all your overconnected family woes. 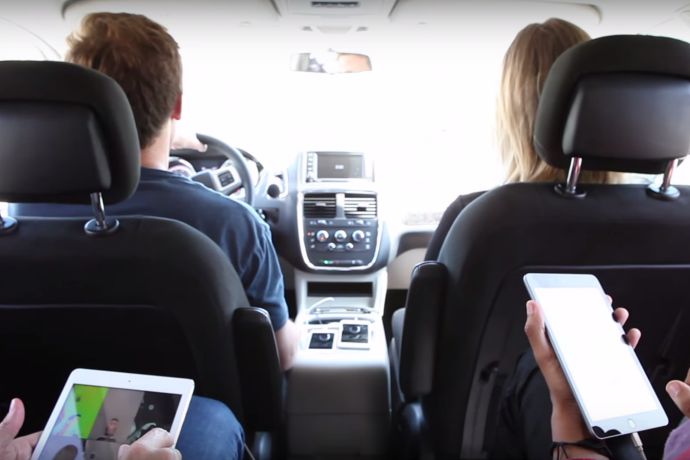 I now have a couple of two-port USB chargers in the cigarette lighter socket, because the idea of running out of batteries in the middle of a Waze nav is terrifying. (And on a totally separate note, when are we going to stop calling them cigarette lighters and start calling them electrical ports? Or maybe we already did and I missed the memo.)

So Belkin, as they often do, saves the day with a really smart new four-port car charger that’s more than just four ports. The Belkin Road Rockstar with 4 USB Ports actually has two ports up front, then a 6-foot cable that extends into the back seat, attached to a hub that clips to the back seat car pocket offering two more USB ports.

This way, your back seat passengers (i.e. kids with tablets)  can listen to their music (i.e. ugh, not that song again) without having to convince you that your own device that’s charging (i.e. the entire reason we’re not getting lost on the way to the theme park) is less important than theirs.

I gave a press sample a try this past week on a road trip and no problems at all. You do have to wrangle the wires a bit to get them where you want and so they’re not in the way, but that goes for pretty much anything with a wire. and if you really just want four ports for the front seat, this may not be the exact perfect product for you because of that extra long wire and the clip-on hub with nowhere really to clip in the front seat.

As for us, it’s perfect. I prefer plugging ours into our second lighter which is hidden  under a console between the front seats, so that the rear seat wire didn’t have quite so far to stretch. It really is pretty clean that way.  Most importantly, I found the 2.4A ports charged our phones and one tablet rather quickly, even at once. And more importantly, no one in the family fought over battery life.

Find the The Belkin Road Rockstar with 4 USB Ports from our affiliate Amazon with free Prime shipping or learn more at Belkin. Thanks to the company for sending one for review.