Can you teach coding to preschoolers? Here are three toys that will try 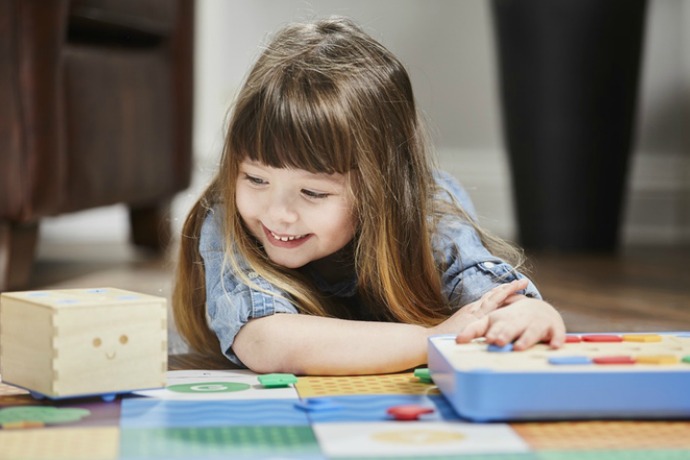 Coding is certainly one of the new buzzwords in education, along with STEM, STEAM, and now, believe it or not, STREAM. And while a lot of learn-to-code apps toys, and games, like Robot School, Dash Robot, and Code Master, are targeted primarily to grade-school kids, we’ve seen several new toys that are hoping to lay the foundation of coding principles in our youngest learners.

So we’ve taken a look at three new toys for kids as young as three to see how they may get kids thinking about coding without needing to know how to read, write, or do complicated computations.

Kids coding before they can use the potty reliably? Sounds like a lofty goal, for sure.

Fisher-Price hopes to get kids as young as three years old learning the foundational skills of coding with the adorable, multi-part, primarily plastic Code-A-Pillar. By rearranging the segments of this blinking, noise-making friend, they’ll see right away how their sequencing changes the way the Code-A-Pillar roams around the room, as each segment will light up in order, from head to tail, affecting the behavior of their new electronic pet.

At a proposed price of $50 for this toy that is expected out later in the year (Update: it’s currently $38.99 at Target; link above) I appreciate that Fisher-Price will also develop a companion app for grade-school kids, so the toy can grow in complexity with the child. Though, the cutesy look and electronic, musical sounds will mostly appeal to a preschool audience. But, for its relatively low cost and straightforward play, I think this could be a fun toy for the youngest kids in our households.

Like the Code-A-Pillar, Cubetto (shown at top) also hopes to teach kids as young as three the earliest stages of coding through play with a hands-on toy that would be huggably cute if it wasn’t a square wooden box. And given that its recent Kickstarter campaign was the crowd-sourcing site’s most funded ed-tech project to date–raising more than 15 times its goal–we aren’t the only ones who are smitten.

One thing that is so wonderful about Cubetto is that it uses colorful wooden pieces, not plastic, screens, or written instructions to act as the interface for the smiling robot. Children can place the pieces, whose colors correspond with their action, in the sequence they would like Cubetto to move on a large, beautifully designed cloth floor map and then, via Bluetooth, Cubetto will do whatever they’ve “told” it to do.

Keep in mind, though, that such ingenuity and fine materials does bring the cost of Cubetto up to $225. Ouch. Though you will find some deals on their site if you buy a package with some of the add-ons.

This one would hurt the pocketbook if your kids don’t take a liking to it which is why we think it’d be great in a group setting, with siblings or in a preschool or homeschooling co-op, where kids can work together to come up with new challenges for their Cubetto.

Related: Dot and Dash robots: The best of what coding toys for kids can be

Combining the fun of block building with robotics, Cubelets from Mod Robotics are a unique way to introduce kids to robotics and coding. Kids as young as four can easily figure out how these sturdy, magnetic blocks connect together, and they’ll quickly learn that each block has a particular function that makes it sense, think, and act in a certain way.

By rearranging the Cubelet blocks, kids will be creating a new program of sorts that they can immediately test to see what happens. This immediacy is very satisfying for young kids who may not have the longest attention span.

My own 11 year old took to Cubelets right away, creating a robot that would zoom away from him every time he tried to sneak up on it. And, as a huge LEGO fan, he loves that Cubelets comes with two Brick Adapters, so he can add details like wings to his Cubelets creation.

Using the Bluetooth Cubelet and the Cubelets app for iOS and Android, older kids can also manipulate their Cubelet remotely and even teach it new behaviors. And the Cubelets Education page has interesting ways to integrate Cubelets into a classroom or even just to take it to the next level in your own home.

However, a decent-sized Cubelets 12 set costs over $300 with the Cubelets 6 just over $150, so this is definitely a high-ticket set of building blocks, especially for preschoolers who may be as apt to throw their expensive toy as build with it.

And Cubelets Studio–the actual programming environment where really ambitious kids and their parents can write code for their Cubelets–is not currently compatible with the newest operating system, OS 4. So, if you are interested in this toy for your child, you’ll need Cubelets Flash. Or, wait until this operating system is up and running before you make a purchase so that you can get the absolute most out of your purchase.