The joy of underwear 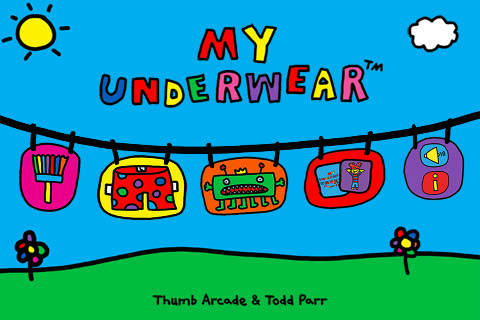 If you’ve enjoyed nice quiet family dinners with your toddler without anyone daring to yell fart or underwear, well enjoy it while you can. You’ve got a few short years, and then those very things will be pretty much the funniest things in the entire world.

(Of course, if you’ve got my SigOth then those things are still the funniest things in the world, and your children have known it since the day they were born.)

Evidently beloved children’s illustrator Todd Parr gets it too, and he’s created a colorful kids app all about underwear, that’s all the right kinds of silly and fun and even educational.

The aptly named My Underwear–which sends my 5 year-old and 3 year-old into fits of giggles every time they
mention it–is great fun. And it rocks it on an iPad, especially.

Four different games include a memory game; a coloring program that’s quite good, in which kids to decorate and save pairs boxers (nothing racy); and a ridiculous Space Invaders-esque game which has you sliding an alien back and forth across a landscape to catch falling underwear on his head.

That’s ridiculous in a good way. For $2.99 you’ll pretty much make your kid’s day. –Liz

Download My Underwear by Todd Parr for iPad or iPhone online at the app store. And psst…I keep laughing myself when I see the link on the app store that says “my underwear support.”