The Samsung Galaxy Tablet. AKA yes, there’s another tablet besides the iPad. 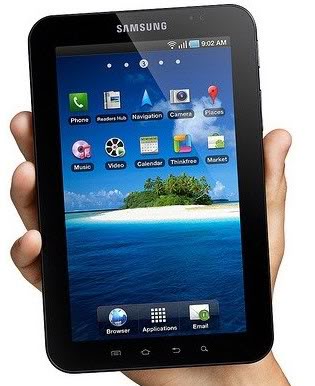 With everyone having iPad fever (myself included), I’ve been anxious to check out competition–the new Samsung Galaxy Tablet, which is the first android tablet on the market across all four phone carriers.

I agree with most of the reviews that I’ve read in that because the Galaxy is so different than an iPad, comparing them is like apples and oranges. But on the other hand, as an iPad owner (and because it’s the only other tablet out there), well, it’s hard not to.

After trying a loaner out for a couple of weeks, here are a few points of note I think are most important if you’re wondering how the Galaxy holds up.

The obvious difference between the Galaxy and the iPad is that the Galaxy has a 7 inch screen compared with the iPad’s 9.56″. Granted, the smaller size makes it much more portable, like a thick e-reader, but you do notice a difference when you’re watching movies, playing games, and surfing the web. If you do already carry a laptop with you or you’re planning on using the tablet for travel, the size is definitely convenient. Especially for us moms who already carry way too much with us at all times.

Overall, the Galaxy was quick and responsive–everything from clicking apps, loading pages, and flipping the screen from vertical to horizontal positioning. However, it’s not the most intuitive for typing emails and doing actual work. In fact, it’s more like trying to do that stuff on a smartphone. Keep in mind, you probably won’t be writing novels on your iPad either, but Apple’s touch-screen keyboard makes it easier to do more than just quick email replies and peeks at websites.

The big benefit of a Galaxy is the camera. While a little slow to respond, it does take pretty decent pictures, a nice touch when your kid is doing something spontaneously adorable.

And you can actually use the Galaxy as a phone, though I imagine it might look a little odd holding a 7 inch screen up to your ear. Good thing it comes bluetooth-enabled.

It’s pretty hard to compete with Apple when it comes to applications; there’s no shortage of awesome ones, all of which are carefully vetted by Apple with an organized system for rating and purchasing. That’s just not the case yet for the Android. While they are definitely ramping up their app selection, and we’re rooting for them in that department, it’s nowhere near what you’re going to get with an iPad.

But breathe easily, you can get Angry Birds.

My bottom line:
The Samsung Galaxy Tablet is a smart gadget that functions much like a giant smartphone or a even super beefed up e-reader. While I already own both of those (and an iPad) and don’t need another similar gadget, I could definitely see how this would be fantastic for some people. Say, a parent who uses a Blackberry for work but wants a tablet too, or someone who is perfectly happy with her not-so-smart phone, but wants all the phone-like features and tablet capabilities.

If you’re mostly using it for watching movies, downloading books for the kids, social networking, and checking email, you could be one very happy Galaxy Tablet owner. –Kristen

To learn more about the Samsung Galaxy Tablet (which starts at around $599 and varies based on your choice of carrier) head over to its very own website. Fancy! You can also purchase it from our sponsor Best Buy.