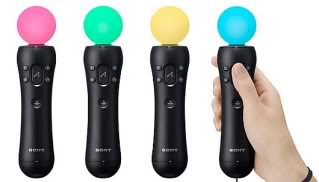 If our Twitter streams are any indication, moms around the country are about at their wits’ ends with winter storms, snow days, and kids stuck indoors. For you Playstation PS3 fans, the PlayStation Move games can offer fun indoor alternatives and help get the family moving.

Playstation Move is Sony’s entry into gaming 2.0, to compete with Nintendo Wii and Xbox 360 Kinect. While there are now 25 games available, and I’ve tried a few of them, here are two I recently tried out and loved.

Start the Party is a collection of interactive party games that is great for families with young kids. The PlayStation Move controller combined with the PlayStation Eye camera displays players in an augmented reality world where you are holding  a paintbrush, light, scissor or fly swatter to play the games. Up to four players can share one PlayStation Move controller for single player, survival or multiplayer party mode, making it good family game. (Unless you’ve got ten in your family.) Even moms will have fun swatting insects and painting a work of art on the TV set.

Families with older kids–or Hannah Montana wannabes–will love SingStar Dance, a game for up to four players who compete by singing and dancing. Think karaoke meets virtual gaming. You’ll need 1-2 microphones and PS Move controllers to get in on the action. I love performing to videos of oldies like Kool and the Gang and Cyndi Lauper, but you’ll also find 21st century pop makers like Lady Gaga with 17 new SingStore songs just made available for download yesterday.

Budding video stars can make and edit their own videos and load to the My SingStar Online to share with their fans and even add special effects to the videos. Moms like me who only sing in the shower can be a backup dancer and leave the singing to their little stars.

If you’ve got younger kids, don’t be too concerned about the Teen rating on this one. It’s presumably due to lyrics like those from Salt n Pepa’s “Push It” but that’s up to you to decide whether that’s too hot for your kids to handle.

PS3 Start The Party is available from our affiliate Amazon for $24.99. The SingStar Dance Party Pack that includes 2 USB Microphones is $39.99.  Those that have a PS3  and want to add the Move features can accessorize with the Move bundle for $94.99 and thePlayStation Eye Camera for $30.00 at Amazon.