Protecting your iPad screen. And probably, your sanity. 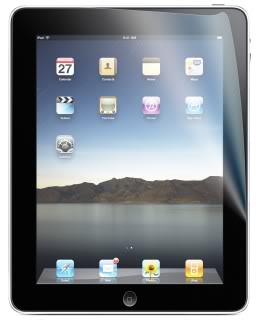 Anyone else get a shiny new iPad and then realize that all the little, greasy fingers in the family will also be sharing your new prized possession?

I initially tried to fight my type A “don’t touch that” tendencies and let my three boys have fun playing iPad games. But soon, I gave into an excellent iPad screen protector.

The HD Anti-Glare film iPad screen protector from PowerSupport is so simple, it adheres with static, not liquid. I wear glasses and glare is an issue for me, but this film not only cuts down on the glare, and reduces fingerprints, but also provides a layer of protection if say, a sharp LEGO makes its way onto your screen.

You’ll have to get over a less than 100% crisp, bright screen, but you’ll be used to it in a second. And the film does not affect touch screen responsiveness at all from what I can tell. Now I just need to find a shockproof case for protection if those little greasy fingers happen to drop the iPad. –Beth

Wishing you had an iPad at all, let alone one with fingerprints? Make sure you’re a Cool Mom Tech newsletter subscriber–one of you will win an iPad at the end of the month!