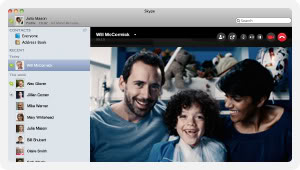 I really haven’t been a big Skype user. I’ve tried it out from a friend’s Mac, and while it definitely worked well, I didn’t find it as user friendly as it could have been in comparison with some other chat services I’ve tried. But now with Skype 5.0 for Mac, fresh out of Beta, I’ve got it locked and loaded on my new MacBook pro (thank you Santa!) ready to use with my frequent flyer husband.

Why is it such an improvement?

Well first there are some small changes which will be familiar to you if you tried out the beta version– everything is all in one window now, all with a pretty streamlined search feature. And boy does the group chat feature look awesome.

But for me and my kids, the best improvement over previous versions of Skype is that the screens of you and your caller are separated out. So instead of having your own image inset at the bottom right of screen, it’s smaller and below the image of the person (or people) you are talking to – similar to how iChat is set up. This makes it so much easier for my kids to use, mostly because they’re not obsessed with looking at themselves the whole entire time and making faces. Which means it’s more like actually talking to the person.

Now all we need is an iPad 2 with a camera. Right, Apple? -Kristen

Download Skype 5.0 for Mac and make free Skype-to-Skype calls. We love the free Skype iPhone and iPad app too!