The adorable scourge of the internet kingdom 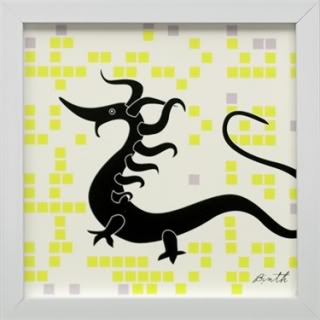 He’s faster than the Code Harpy and more more deadly than the Technotroll, yet he also manages to be cuter than your average Linux Lizard.

He’s the dreaded Pixel Dragon, and he’s coming to a nursery wall near you–and at a great price too.

This handsome Pixel Dragon is one of ten moddishly awesome animal characters captured in lemon, lavender, and black by our friends at design studio BINTH. He’s perfect for a hip nursery, a future geeky boy’s room, or even for a pop of cheery color in an office. He’s screenprinted in hand-mixed inks and comes pre-assembled in a white metal frame behind plexiglass–for your own safety, of course.

At 5.75 inches square and only $28, he’s the perfect size for a grouping of black and white photos and silhouettes, or you can surround him with his matching friends. But we can’t be held responsible for the havoc he’ll wreak on any pixels you leave lying unattended around the house. He’s prone to gobbling them up and breathing defragging fire. –Delilah

The Pixel Dragon and more cool nursery art are available at BINTH.