The future of tablets: Not just iPads 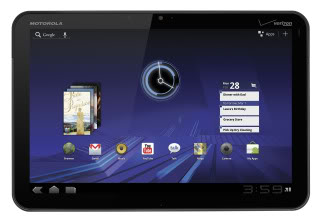 A few weeks ago I reported on all the CES discoveries made just for moms. But if there was one thing that really struck me at the show, it’s that tablets are here, they’re not going away, and boy do moms love them.

Honestly, the majority of tablets that I saw did not match up to the ever popular iPad, in my book. But there are a few that stand out as serious contenders for moms who are coveting an iPad, but want to see what else is out there.

Motorola Xoom
Moms that want a fast browsing experience and access to apps will love that the Motorola Xoom (seen above) is upgradable to the new 4G LTE network. What really differentiates this one from iPad is that it plays content with Flash. (hint hint, iPad)

BlackBerry Playbook
The 7″ BlackBerry Playbook is also Flash enabled, and a good choice for multitasking moms–it includes a HD camera for video chats or photos (although it’s not super handy to use a 7″ tablet to take photos). The one downside: not a big app inventory yet. The operating system is new, so hopefully developers will jump on it soon.

The Toshiba Tablet
While I didn’t see a full demo, the 10.1 inch Toshiba Tablet is coming soon and there’s a lot of buzz about it. It will run the Android 3.0 operating system made for tablets and is packed with features including a video and still cam. A docking port seems like a smart addition to make it easy to remember to charge.

After all, the last thing you want is a tablet that fizzles out right in the middle of your 2 year-old’s favorite Barney episode, 20,000 feet above ground. –Beth

For more tablet possibilities, see our past reviews of the Samsung Galaxy Tablet and the Dell Inspiron Duo which is a netbook/tablet hybrid.