Yes, Virginia, there is a tooth fairy. This app proves it. 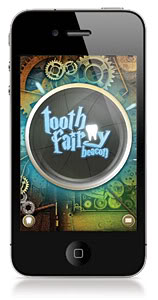 The tooth fairy should just set up a room in our house with all the visits she’s been making lately. My kindergartner wakes up in the morning after a lost tooth to whatever she’s left behind and the tooth fairy once again reigns supreme, at least until the Easter Bunny comes along.

Imagine his delight if he were actually able to communicate with the tooth fairy.

Now with the Tooth Fairy Beacon app, there is. This is a journey into her mystical world where your child and his/her tooth gets to be smack dab in the middle of it. According to the app, your child represents a star in the sky and the lost tooth is the only thing that will recharge it and add to its brilliance, which is why she needs to take it with her. Another cute feature is the tooth scanner where the child can place the actual tooth on the iPhone and a “Magic Meter” scans it to see how well it has been brushed.

The animation and audio effects are definitely borrow (ahem) a page from Harry Potter, but the app itself is well-designed and will endear the tooth fairy even more to any gap-toothed child. I also like that the developers will donate 10% of each purchase to the National Children’s Oral Health Foundation to aid in its mission of eliminating pediatric dental disease. -Jeana

The Tooth Fairy Beacon app is available in iTunes for $1.99.