Is the iPad Mini good for kids? 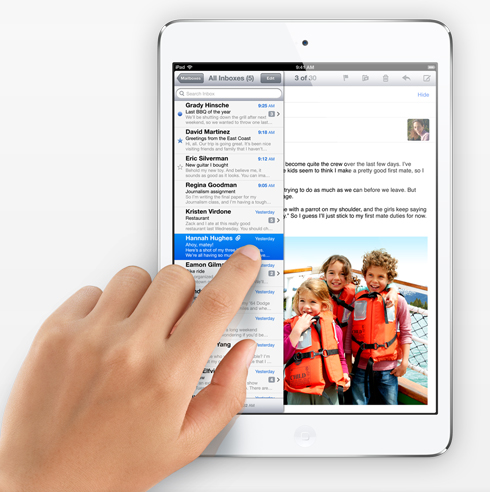 With the launch of Apple’s new iPad Mini, we’re hearing buzz that it’s the perfect tablet for kids. And yes, while the 7.9 inch screen makes it easier for children to manage and hold, which was a rationale lots of parents were using for the Kindle Fire last year, we’re not sure it’s really the best gadget investment for children.

Here’s why we think you might want to skip the iPad Mini for your kids and instead, consider our suggestions for cool kid-friendly gadgets.

As much as we love the drop in size and portability of the iPad Mini, it’s pretty pricey. At $329 plus the cost of a case, you’re making a big investment in a gadget that’s not really made to stand up to what kids might put it through. It’s super light and thin, which we imagine might make it a little easier to drop.

If you’re dead set on getting your tween or teen a tablet that’s not considered a kid’s tablet, you might want to take a look at the original Kindle Fire, which is only $199, or the new Kindle Fire HD which is $50 more. Keep in mind that in our opinion, kids will still require monitoring since they’ll have Internet as well as access to the Amazon Store, however, it’s a solid tablet for the price.

For app-obsessed kids, try the iPod Touch, particularly the old models. Even though they won’t have as many fancy features as the new iPod Touch, we’re pretty sure a tween doesn’t necessarily need a fabulous camera or Siri. And if you’ve got an old iPhone full of apps, pass that along to your kids. Without the data plan, it’s basically an iPod Touch.

If your kids are going to use their gadget for reading, we think a Kindle e-reader (or NOOK e-reader if you’re a Barnes and Noble fan) is a fabulous investment. It really does hold up well to kid usage, and it helps cut down on book clutter, which would be overtaking our house. And if you want to forgo the clip-on lamp if they’re reading at night, take a look at the new Kindle Paperwhite or Nook Simple Touch with Glowlight which feature a built-in reading lamp.

For little gamers, we’re still pretty big fans of the Nintendo DS products, including the newish Nintendo 3DS, which still allows you to play the older DS games thanks to the handy 2D mode. Even though we have a family iPad full of games and educational apps, my kids head straight for their DS when they have video game time.

Will you be getting your kids the new iPad Mini? Tell us! And if you’re wondering when kids are ready for their own gaming device, take a peek at our thoughts.