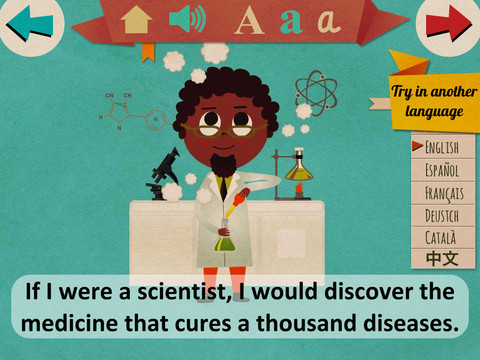 Learning words in different languages never gets old. That’s how I became obsessed with telenovelas, but that’s an entirely different post. The trick is keeping things fun and interesting so that your kid will dig languages too. Thankfully, the creative folks at Sanoen hit it out of the park with a stellar kids’ app that combines languages, spelling, vocabulary and more.

Granted the When I Grow Up app may not have the most creative name, but the app itself sure is, with gorgeous, progressive illustrations of, well, what you can be when you grow up. I completely dig the female entrepreneur, male chef and overall multicultural feel all illustrated with a fun, mid-century vibrancy.

The app reads like a combo children’s book and interactive app, with various levels that grow as your kid does. You pick the right one based on your child’s ability in any of six languages. So, your kid may rock an advanced level in English, but in Catalan? Maybe not. Yet. I will say the first level is a little too Baby Einstein-ish for my liking; words flash on the screen with the belief that somehow your baby will learn via osmosis? Plus, we’re not big fans of screen times for babies overall. However the other levels are perfection, really helping your future multilingual child to spell, read, and even make sentences.

Just be warned that the “English” version has an English accent, which could be a bit confusing to very early readers or any kid who doesn’t watch Charlie and Lola with regularity.

Learn Spanish, French, German and more with When I Grow Up, available for your iPad only at the app store. It’s cheaper than a cup of joe or a cafe ole’  and fun for the entire family. Seriously.