The much buzzed about LEGO Simpsons episode: Brick Like Me episode 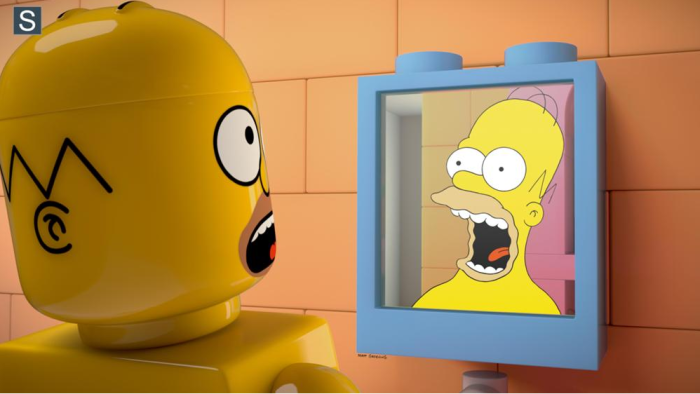 We’re still smiling over The Simpsons LEGO Minifigs and the launch of the incredible Simspons LEGO house, and now here’s one more reason to rejoice over this coupling of our favorite animated television characters and our favorite plastic building blocks: A full-length Simpsons episode titled Brick Like Me airing Sunday night and featuring Homer, Marge and crew, all done up as minifigs in a world of LEGO bricks.

Using computer animation, the Simpsons look quite comfortable in LEGO, though the characters themselves definitely notice something isn’t quite right. Expect plenty of classic Simpsons meta lines, like when Homer looks over to see a larger-than-normal Maggie sucking on a bottle and murmers affectionately, Ahhhh, they’re so cute when they’re DUPLO.

Word on the street is that the typical Simpsons humor will be dialed down a notch to accommodate the large number of young viewers who will be begging for a later bedtime to watch the episode. In other words, no sexy time with Homer and Marge. Still, depending on the ages of your kids, you may want to DVR this episode anyway, since even the toned-down Simpsons are still the Simpsons. As in when Homer leans over and challenges someone to kiss his flat plastic butt. You know that’ll be all over the playground on Monday. Doh!

The Simpsons’ Brick Like Me episode will air Sunday, May 4th at 8pm ET on FOX. Check your local listings for more details.