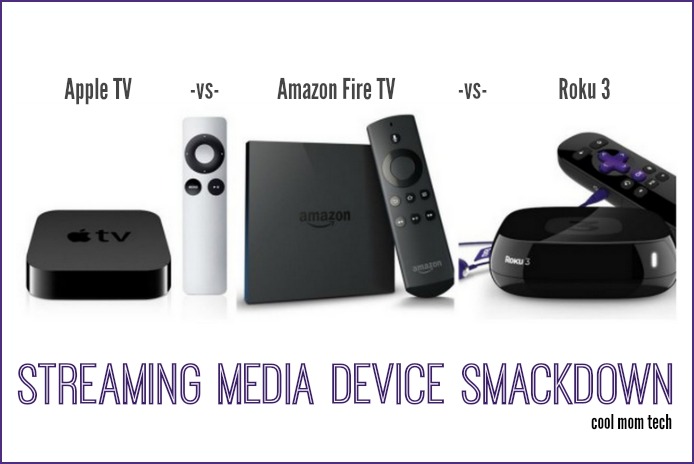 If you’re going to make the investment in a new streaming media device, we want to helping you out by comparing the top three – Apple TV, Amazon Fire TV and Roku 3 – and taking a closer look at the pros and cons, especially as they relate to family viewing.

In our home, movie-watching has definitely evolved from indie flicks with my husband during our single days, to ones featuring more animation than I ever thought possible. With five people in the house all with different tastes, I totally understand the idea of families with competing entertainment needs. So in our latest high-tech smackdown of streaming devices, I hope to help you figure out the best way to bring that big world of content streaming into your home.

Note: for this purpose, we’re sticking with boxtop sets; if you’re interested in learning  more about devices like Google Chromecast or the Roku Streaming Stick, check out our individual reviews of those devices.

If you’re a dedicated iOS user and have your trusty iPhone or iPad, it’s pretty much a no-brainer to go with Apple TV. You can sync everything together so that your streaming media and mobile devices are harmonious, and all of your saved music, shows and movies cross platforms so that there’s no real interruption in content. And speaking of content, in addition to new releases and currently TV shows, there are about 30 additional channels to choose from like PBS Kids and Disney Junior for your little kids; and Netflix, Hulu, A&E and the History Channel for the big ones. And thanks to iTunes, Apple seems to get most new content first, including movies still in theaters. That’s a huge deal for bigger families who can’t wait to see Frozen a second time (or by now, 57th time) without paying movie theater prices.

AirPlay alone on Apple TV makes it worthwhile for iOS users, giving you the ability to broadcast anything to your TV, making those cute kid videos, slideshows, iTune purchases, and even app play easily accessible on your big screen which is a truly great benefit. However AirPlay is really the only vehicle for gaming on Apple TV. Without a dedicated gaming channel, true gamers will have to rely on whatever apps they already have on their iPhones, then AirPlay them to get the bigger screen effect.

Just know there have been some complaints about freezing and buffering since the iOS7 update, particularly with Netflix compatibility.

Bottom line: Forget it if you’re an Android family, but for $99, having the ability to extend existing media and apps on your iOS device to your TV is totally worth it. Content-wise, Apple TV is top notch for new releases, those indie flicks, kids’ movies and all the Oscar winners you never had a chance to see, even if it costs more to rent or buy. But it’s still cheaper than hauling the family to the theater.

Apple TV is to iOS like Amazon Fire TV is to Kindle. Again, it goes back to the ancillary devices you already have, and if it’s a Kindle Fire you’re reading with in bed, this is the device for you. But there are other reasons  Fire TV can be great for families, like the mirroring feature which displays anything from your Kindle Fire on the big screen–photos from last weekend’s birthday party, your favorite playlist from Pandora, you name it.

I think that the Fire TV is easily the most kid-friendly box of the three. First off, the voice control feature is pretty amazing. For younger kids who don’t quite know their way around the alphabet and can’t quite spell things out on screen, this is a godsend – and yes, in my experience it can detect what a five-year-old is asking (most of the time). So if this is something you’re considering for a family room or playroom, it’s definitely a smart choice.

Where Amazon Fire TV really pays for itself however, is if you’re an existing Amazon Prime member. If you have already spent the $99 annual fee, you have thousands of options on your TV, giving you free access to all the Downton Abbey, Parks & Recreation and Daniel Tiger’s Neighborhood your family wants, not to mention thousands of kid- and adult-friendly movies. On the other hand, it can be a little tough to find your way to the free Prime content – Roku actually makes it easier to do that. No doubt the folks at Amazon would prefer you watch your favorite pay titles instead.

Fire TV also has a gaming remote that you can purchase separately for $40, which gives kids a more dedicated way to play favorites like Minecraft, but Amazon is also in talks with companies like EA Sports and Disney to roll out tons more gaming options. If that goes through, this could be a game changer for families.

Bottom line: Existing Kindle Fire users and current Amazon Prime members will love the ease-of-use and content options of the Fire TV. Extra bonus is that it comes to you pre-loaded with your current selections and past purchases from Amazon. To maximize what the Fire TV offers, you really should have the Prime membership, so you’d need to consider if the additional $99 (on top of the Fire TV’s cost) is worth the investment. FreeTime parental controls are also available on Fire TV, making it the most family-friendly option of the three.

Although the Roku 3 probably doesn’t get as much press as the first two, competing against the Amazon and Apple marketing machines, it’s still held its own beautifully thanks to an overall outstanding experience, great nav, and lots of word of mouth. (Our editor Liz claims to be their biggest fan.)

First, Roku blows Apple TV and Fire TV out of the water with its channel offerings: More than 1000 channels, as opposed to the 20 to 30 from the other services. That’s quite a difference. You can get the standards on Roku, of course, like Netflix, Hulu, Amazon, HBO Go and Showtime, but you’re also privy to hundreds of other unique media channels that are categorized into topics like Travel, Fitness, Comedy and Kids & Family. We love that there are even channels dedicated to TED Talks, and to NASA for the especially geeky. And we’re known to turn on HuffPost Live every so often too.

The navigation is remarkably intuitive and probably the easiest to use of all the systems, which makes it another good choice if you have kids in the house. Content is easy to find (easier than with the other services) thanks to an excellent global search across all channels–huge when young hands are wrestling with the remote. In fact, the other systems could definitely take a note on search from Roku on this front. And while there is no voice search function, the global search is simple using the remote control, and it’s nice to know what each movie costs up front, before clicking through into the app.

Again, gaming isn’t at the forefront of the Roku with fewer than 100 games to choose from, so if you’re all about one-stop-entertainment venue that includes gaming, Roku may not be your top choice. But I do like that the remote acts as a gaming controller eliminating the need to purchase one separately as you do with the Fire TV. If the company invests in the gaming functionality, Roku could really clean up in that department too.

Bottom line: For content-hungry hounds and those who want really vast and varied content with intuitive navigation, the Roku 3 is for you. There’s a Roku mobile app that you can use to simulate mirroring functionality as with the other two devices, but the cross-device functionality isn’t really where this reigns. Content is king with Roku, and has a thousand channels to prove it. Plus it’s very easy for kids to navigate through the content and between channels easily, thanks to an excellent remote. Just don’t lose it! (Or if you do, hey, at least you have that app.)

Keep in mind the service that’s right for you will be based on what your family needs, and increasingly these days, the mobile devices you already use. We’ll keep an eye for the updates and next-generation services because we imagine through content partnerships and upgrades, the game could change completely. Soon.