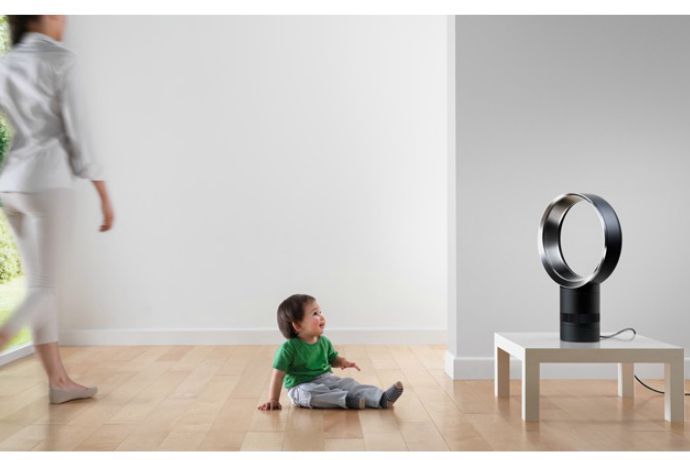 I remember my grandmother’s old metal fan — aka, the finger chopper — which we regarded with fear and awe as its blades sliced through the air. Today’s plastic-blade fans are so much safer, though my kids were still fascinated by that spinning blade; enough so that I had to have the conversation about keeping fingers, straws, paper, and long pieces of grass away from the fan more than once. Which is one reason I was so intrigued to try out the bladeless Dyson AM06 Cool Fan which seems perfect for families with young kids.

Related: The ecobee3 Smart WiFi Thermostat: Do you really need one this fancy?

The other reason I couldn’t wait to give this fan a spin (ha, spin) was because, well, it’s a Dyson. I have two Dyson vacuums and adore them both for their longstanding, consistent power and ease of use. Could their fan take that same suction that gets everything off my floors and channel it into a powerful fan, even when that fan is only 10 inches across?

In a word: Yes. This one bladeless fan can push a surprising amount of air across the room. With ten settings, it’s easy to take the airflow from “whoa” to “ahhhh”, so that it can go from an across-the-room cooler to a gentle breeze on my son’s cheek as he sleeps.

Another thing that makes this a great pick for families with kids like my son is the sound, or lack thereof. While I wouldn’t say it’s silent, the AM06 is extremely quiet. At the lowest setting, we can barely hear anything. At the middle setting–which my son likes for sleeping–it’s an audible, pleasant whoosh of white noise. With its sleep timer, we can even set it for up to nine hours so that it shuts off on its own after he gets up for the day since he sometimes doesn’t hear that it’s running.

Plus, since both my son and I like everything that looks cool and futuristic, the AM06 delivers on that too, especially when we turn on the oscillation control to watch it gracefully turn from side to side. I have to admit, that this is one fan I would show off anywhere in my house since it looks better than any other we own.

Alas, such coolness comes at a price, with Dyson Cool Fan models starting at almost $300. Yeoch. But given that I’ve been pushing a Dyson vacuum for at least a decade without any issues, I generally think their products live up to the hefty price tag, especially over time.

The bladeless Dyson AM06 Cool Fan, along with other Cool Fan models, are available at their website. Plus you can save 20% off select Dyson Cool Fans at Dyson.com from now until September 12. Thank you to Dyson for sending CMT a model to test.