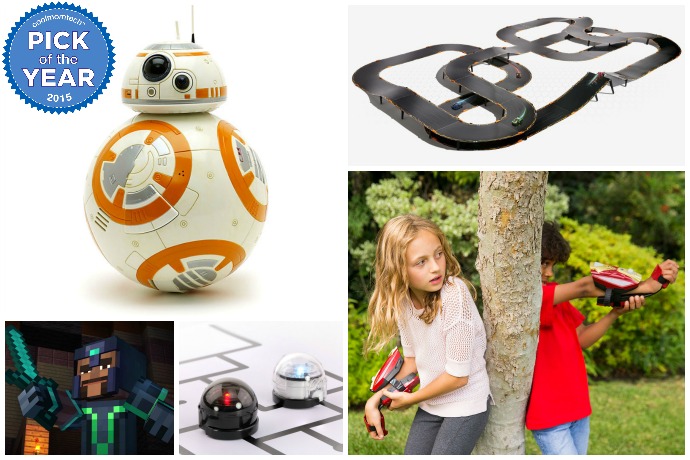 Okay, so this is the post in our editors’ top picks of the year series we know a lot of our readers have been waiting for: The coolest tech toys of 2015. There are so many amazing trends we’re seeing here:  Coding is becoming more accessible to even younger kids, interactivity is getting more interactive, and educational toys are blurring the line between education and toy. We can’t wait to see what 2016 brings! – Liz + Kristen

This post is part of of our annual series featuring our Editors’ Best Tech of 2015. No pay-for-play, no contests to enter, no voting! Just the things we’ve loved in 2015 that we think deserve an extra nod for coolness.

We called it Hot Wheels meets Slot Cars meets the world’s best racing app and that’s why we’re all still playing Anki OVERDRIVE regularly, even months after we first opened the box. (What can we say? Every kid who comes to visit asks to play!) It feels like the ultimate advanced graphic video arcade racing game, except you’re racing real cars on a real track thanks to pretty great AI and iOS or Android app responsiveness. The special skills and weapons of each car, and the well-developed personalities of the drivers just keep the fun going, and the modularity of the track can make it new each time.

The first in the Disney Playmation series is an impressive interactive toy combining Bluetooth, the Cloud, motion sensors as well as wearable technology, allowing kids to experience fantastic creative play that brings their imagined and preset digital stories to life. The missions are engaging and compelling — not surprising, considering Disney knows a little something about storytelling — making this a fantastic way to get kids off the couch and easily one of the coolest new tech toys of 2015, let alone all toys. But hey, Disney! A few more girls on the website perhaps? They like The Avengers, too.

This was probably the year of the drone, and no one seems to be having more fun with it than Parrot, which is amping it up with 7 options that do more than fly. The Hydrofoil MiniDrone moves through water and air; the speedy Jumping Race MiniDrone is designed for competition with others; and the rugged Jumping Sumo is like an app-controlled acrobat. Plus, photos and video! We only wish the flying time was about ten times what it is because the hardest part is taking a break to recharge.

The newest in the amazing Sphero series of toys makes learning the basics of coding principles super fun, even for preschoolers. Kids learn how to make the little guy move, play games, and complete tasks using an Android or iOS device and we can’t recommend it more highly for kids interested in beginning coding.

We’re all big fans of the Roominate toys that take imaginary play to a new, scientific level and this year they’ve added an all new rPower hub, which lets kids control the circuits they build, all from a phone or tablet. In other words, now that dollhouse can light up, that ferris wheel can move, and your kid becomes master of his or her own universe.

For kids who are more apt to create something really cool if all the supplies are right in front of them, this is a great addition to the collection of littleBITS circuitry kits for kids. It includes instructions for how to build things like a robot that can draw, a bubble blower, or a Bumperball arcade-style game, and includes motors, wheels, and all the supplies you’ll need to actually make a dozen separate projects.

related: The 15 coolest new tech gadgets of the year: Editors’ Best Tech of 2015

Another fun intro to the world of coding, this tiny (really, it’s smaller than a golf ball) little programmable robot lets kids explore sequencing and coding through challenges, competitive play, and interactive games that are as simple as opening up an app, or just drawing lines on paper to create color-coded code commands. Plus the company shows real commitment to STEM education, offering teachers free programming and STEM lesson plans for classroom integration, making it easily one of our favorite new tech toys of 2015. Looking forward to great things from this relatively new company.

If your kids are obsessed with Minecraft, you can now put that love to work by building their own computers with this kit that helps kids learn engineering, then explore and build in their own modified Minecraft world. But this is no mere computer — you’ll find LED lights, motion sensors, buzzers and switches that kids can physically assemble, which control what’s happening on the screen. So cool!

This wasn’t one of the better years for family-friendly video games, but the introduction of Minecraft Storymode for Playstation, Xbox, Xbox One, and PC would be a standout most any year. From Telltale Games in partnership with Mojang, it’s like a choose your own adventure style, first-person adventure game that brings the world of Minecraft to animated life, with four total chapters available for download — each taking a good long time to complete. We love the responsive interface, the in-game puzzles that are perfect for kids (if a little easy for adults), and the fact that your own character, “Jesse,” can be either male or female. Bonus for parents: If you’re not playing the game, you can play ID the Voices, keeping an ear out for the the voice work of Patton Oswald, Billy West, Paul Reubens, Martha Plimpton and even Corey Feldman. 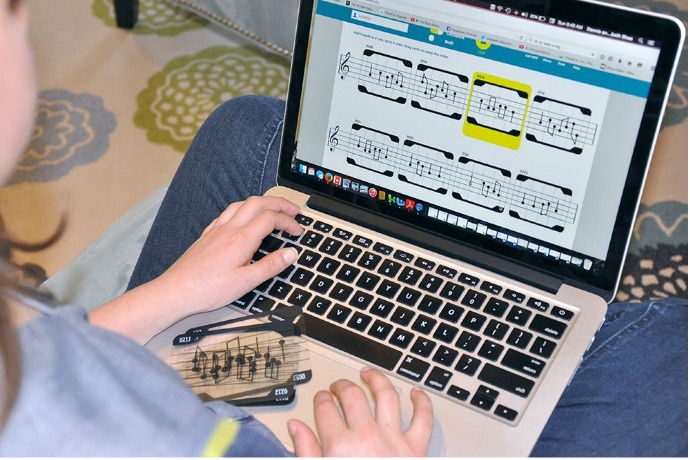 Another example of tech and learning coming together, this time for music education. This new musical card game from Think Fun has kids six and up creating their own compositions in no time, without even having to read a note of music. And yet maybe that’s what it will lead to.