The coolest way to teach kids the value of a dollar 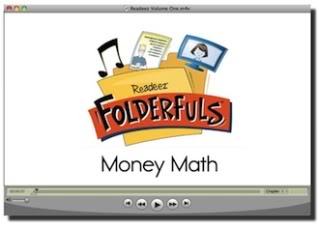 Those of you who are long-time readers of our sister site, Cool Mom Picks, may have heard us rave about Readeez DVDs, which introduce kids to phonics, reading and good music in a way that is fun, playful and effective.

Now they have a new downloadable series focusing on just a single important subject. And the first one  happens to be one my kids really like.

Readeez new Folderfuls series kicks off with a digital download about money, a topic that has excited my kids ever since their grandmother first pressed a shiny quarter into their pudgy fists.

Called Money Math, this Folderfuls includes five songs with an introduction to the four main coins and one song called The Value of a Dollar. If your kids are still at the age where they think a nickel is worth more than a dime because it is bigger, this one is for you, though even my older kids were transfixed too.

What makes the Readeez system so nifty is the trifecta of clever, fun-to-listen-to songs, crisp animation and a cool technique called SyllableSync. Instead of having the words appear on screen as in closed captioning, Readeez words appear syllable-by-syllable as they are sung, something that must take Readeez creator Michael Rachap hours and hours to get so perfectly right.

The Folderfuls also include MP3s of the songs which, yes, can stand on their own without making you want to run into the woods screaming like some educational music makes me do. And the printable PDF ebook of the lyrics and Gerry O’Neill’s illustrations makes a nice reference, especially if you want to grab a handful of change, sit on the floor, and ask them to tell you about the coins.

The whole thing only costs you 20 quarters, 30 dimes, 16 nickels and 15 pennies. You do the math. –Christina

Check out Readeez Money Math Folderfuls for a digital download including a video file, MP3 files, a PDF ebook and more.