Wii U – the next generation Nintendo Wii. 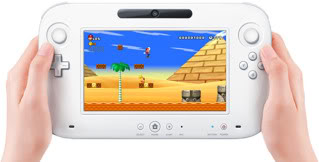 If you are a Nintendo Wii fan (and really, who isn’t?) then yesterday’s announcement from Nintendo is one you won’t want to miss. The next generation Wii gaming system has been announced and it is called (drumroll) Wii U.

Wii U has a new “tablet meets gaming gadget” console with a 6.2 inch screen, a gyroscope and accelerometer (sounds fancy!) for motion sensing action, plus an inward facing camera, a microphone, speakers, and 2 circle pads with classic gaming buttons as an option too.

When you use this new controller, you’ll have a different competitive experience than friends looking at the TV, or you can use it to jump right into mulitiplayer cooperative gaming all in fancy HD.

It looks to be a great family experience, considering up to four Wii Remote controllers and other input devices like a Wii Balance Board can be connected at once. I also really like that if you’ve already got a library of existing Wii games, the Wii U  console is backward compatible. No worries about your investment going the way of the Betamax. Although no doubt you’ll want to try the new releases like New Super Mario Bros right away.

Can’t wait to take it out for a spin? Neither can I, but there is no news yet on pricing or shipping dates. I’m hoping before holidays for sure. -Beth

Is the Wii U something you gaming fans will want to try out?