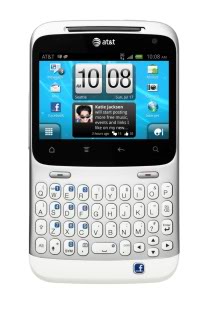 I have a 2 year old smartphone. That’s easily middle age in phone years and with the contract ending in August I’ve starting the research for my next phone adventure. While the logical first step in a mom’s smartphone comparison is the upcoming iPhone 5, I’m leaning towards an Android phone because I use so many Google products.

One innovative company you may not know a lot about is HTC, which happens to make some standout Android phones worth investigating.

1. HTC Status
Yes, it looks a little like a Blackberry, and there’s something to be said for the physical keyboard. If you’re as social networking obsessed as I am, you’ll appreciate the other handy features on the Status (shown above) including “one touch” Facebook status capabilities, location and photo updates. It even shows you a friend or family member’s most recent status update as you call them–so you might just know why your teen is home late before he even answers the phone. The Status is offered by AT&T.

This Sprint phone is great for you social networkers. It’s a manageable compact size, with 4G speed, along with a beautiful screen, YouTube player, and Kindle preloaded. It even groups all your tweets, texts and emails by user, instead of by medium, which is so smart. My favorite feature–an actual physical keyboard for fast texting.

The Sprint HTC Evo 3D is the first ever 3D phone. Seriously–you can take 3D movies and photos right from the phone, which look pretty great. Do you need a 3D display? Probably not. But it happens to be super cool and doesn’t require glasses. It also has a large battery for mobile moms, a fast dual-core processor. And it connects up to 8 devices at once, so this is really one for people into sharing media.

Here’s a secret: The Thunderbolt is basically the same as the Evo 4G, only it’s offered through Verizon instead of Sprint. It’s lightning fast (pun intended) because it runs on their fast 4G LTE network. And it’s all about entertainment and wireless capabilities–it’s even got a kickstand for easy viewing and surround sound. Plus you can beam any media from your phone wirelessly to your flat-screen TV. Amazing. You can also turn your phone into a wireless router for other devices, which is great for moms on the go.

I’m looking forward to when it has the newest Android 2.3 Gingerbread operating system upgrade, which should work out a few minor kinks.

Two other HTC phones worth a look are the Verizon HTC Trophy Windows phone with its Xbox Games Hub to entertain my sons on the go, and the T-Mobile myTouch 4G with mobile video chat and Swype text input to me help me get over my fear of using virtual keyboards. The technology is new and we’re hearing good things but have yet to try it out ourselves.

So what did I decide on? The Thunderbolt. Between my on-the-go schedule and three boys in the house who are all about entertainment, it seemed like the perfect fit. –Beth

Find more about HTC phones at the HTC website.