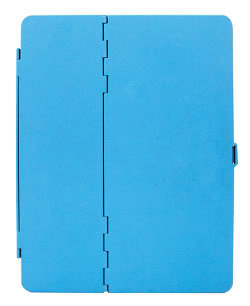 Though I knew it was risky, for the first couple of months of owning a shiny new iPad 2, I didn’t use protection. Oh sure, I worried that it’d get scratched, dinged or (gulp) dropped, I was just overwhelmed with the number of cases out there: did I want a front cover, a back cover, rubber, plastic, leather? Book style or one that could convert to a stand? Did I really want to spend that much?

So when I discovered a brand new cover that would protect my new iPad better than telling my kids to only use it over carpet, I jumped at the chance to try it out.

I still hand my iPad over to the kids as if I’m handing them a dozen eggs, but at least now I know that it’s much better protected with the new iPad 2 Hard Shell Case by Hammerhead. I love how lightweight the hard shell polymer case is, and that it covers both the front and back of the tablet since I’d like to keep all sides of my tablet safe thankyouverymuch.

I wouldn’t recommend dropping it down a flight of stairs to test, but my precious tablet seems pretty secure when it’s all closed up.

The handy fold on the front lid puts the tablet at a nice incline for typing messages. Or flip it and it stands like a mini movie screen. And though the case does cover the entire iPad, it doesn’t block anything important, making it still a breeze to charge, fiddle with volume or use
the camera.

I have basic black but it comes in nine other pretty colors–a nice feature if you have more than one tablet in the house and don’t want to accidentally grab your spouse’s as you run out the door. I do wish the black was a little shinier since the flat black finish does show greasy finger marks when it hits the light, though I suppose cleaner families won’t have this problem as much as we do.

Best of all, the case price is really reasonable; tablets already cost so much it’s hard for me to justify throwing more money at it. I’d rather spend a little extra on all those apps my kids keep finding. – Christina

You’ll find all ten colors of Hammerhead’s iPad 2 Hard Shell Case for sale on their website or at our affiliate Amazon.