Dads Dig This – 3 reasons to love iMovie for iPhone 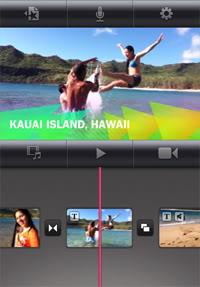 I used to think I could have been a great filmmaker, the only things standing between me and a brilliant directing career being my utter technical incompetence and my unwillingness to dedicate any time to learning about how movies were actually made.

Despite my ignorance, I dabbled, from the 8th grade production of a Super 8 conceptual art film to a short film starring a dead mouse on a stick who ultimately became fodder for an angry real estate developer’s nail gun. But I always knew that, if I held out long enough, someone would come up with a way for me and my technically disinclined ilk to transform our artistic visions into slick, concise short films without having to work very hard.

And when I downloaded the iMovie app for my iPhone, I knew that day had arrived. Here are the top three reasons I get giddy just thinking about it.

1. Only one machine required: I know it’s like the easiest thing in the world to dump video from my iPhone onto my computer. But why would I even bother if I have the editing program right on the phone? I actually messed around with iMovie on my computer before I got the iPhone app, and I found that the iPhone app was more intuitive, and because it doesn’t offer many options, much simpler to use.

2. Soundtrack: A video can look pretty decent if it’s edited well, but it doesn’t seem “real” until it has some background music. The iMovie app offers a handful of innocuous soundtracks you can drop into your film, or you can select something from the music you have on your phone.

3. Storing and Sharing: Once you’ve finished your masterpiece, there’s no need to transfer it to a computer.  With a couple clicks, you can store it on your phone’s camera roll or iTunes; or share it to Facebook, YouTube, or Vimeo, where it will certainly go viral and the commemorative t-shirts you sell will pay for your kids’ college education. – Andy Hinds