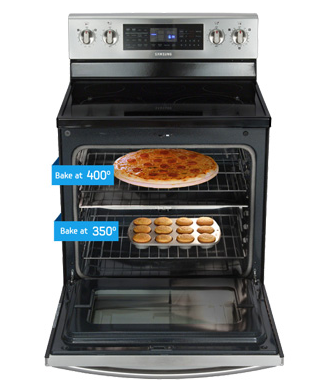 This past week, I got a first look at an absolute game-changer of an
oven: The Samsung Flex Duo Oven, which was announced at CES earlier this year. In short, it converts easily from a single oven
to two, with just the insertion of a dedicated insulated tray through a center channel. Pretty nifty.

The Flex Duo Oven is a single 5.9 cubic foot convection oven, or
functions as two smaller ones (2.7 and 3.0 cu.ft.). The really amazing
thing: the separate compartments not only have their
own temperatures and timers, but they don’t mingle odors. Which means
thanks to the Smart Divider, evidently you can bake cupcakes on the top
and samon on the bottom without one smelling like the other.

I’d
be scared to try it personally, but some trusted sources assure me it’s
legit.

Now certainly a convertible oven has obvious benefits when you’re
cooking for 20 people at Thanksgiving. But it has great applications the
rest of the year too. I like the idea of using a smaller oven during
the week to save energy, and get the preheating done a little sooner.
There’s also an electric range on top that includes a fifth warming
burner, and a warming drawer below which is always handy.

No gas
yet though; bummer.

As for how it works–from what I can tell,
it’s terrific. I not only caught a demo of the oven, I caught a demo put
on by the charming Voltaggio brothers, two of
the few Top Chef contestants to be better known for their masterful
cooking than anything else (Bryan was the season 6 winner). They swear
by the Samsung Flex Duo, and to whatever degree I take such celebrity
endorsements with a grain of salt, the food I tried right out of the
oven was spectacular.

I’m still dreaming about the roasted root
vegetables, the flawless turkey, and those olive brioche pinwheels–all
made at once, in one oven.

Now if I could just learn to cook as
well as Michael and Bryan, I’d be all set. –Liz

Learn
more about the Samsung
Flex Duo Oven on Samsung.com.