Getting a charge out of PlugBug 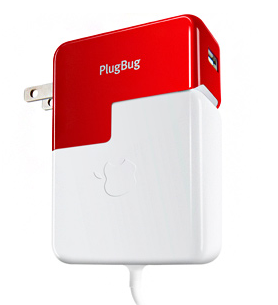 Okay, raise your hand if you’ve ever had to choose between charging your iPad and charging your MacBook? Or uh…fighting with the sigOth in the hotel room about who gets to charge their device in the one outlet available?

The PlugBug dual charger from
twelvesouth solves both those problems, and it is absolutely genius in
its simplicity. Essentially it lets you plug the top half of your Apple
laptop power supply into the charger, while plugging a USB device into
the top half. The picture pretty much says it all.

This past week, traveling to a foreign country where I only had a single
currency adapter at my disposal, I found the PlugBug absolutely
indispensible. With 10w of power it was super fast. I could charge my
laptop and iPad in the PlugBug, while keeping my iPhone charging in the
laptop itself.

I’d imagine it’s also great for those situations where you only have
access to a single outlet, or where you don’t want to use your laptop to
charge a device–say a colleague or friend needs a boost, but doesn’t
want to sync with your own computer.

$34.99, mamas. Killer stocking stuffer for that Mac user in your life. –Liz

Find the The PlugBug charger from
twelvesouth or from our affiliate, Amazon