Downton Abbey – 1 of 3 good reasons to keep your Netflix subscription. 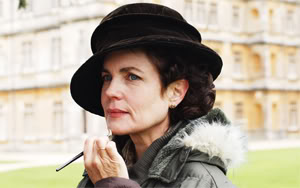 After hearing so many people rave about Downton Abbey, I finally had to check it out for myself. As it turns out, it’s available on Netflix now, which has totally rejuvenated my excitement at having a subscription, the way Jackass 3 has not. (Sigh.)

Put these three series in your queue for those late night breastfeeding sessions, or the rare mommy time moments you just need some good entertainment.

Let’s just say that all the buzz about Downton Abbey is not just hype. After a successful run in Great Britain, PBS’ drama set in early 20th Century England has arrived here in the United States, and follows the fictional lives of a British aristocratic family and their house staff. Sound boring? Absolutely not. It’s full of everything that makes a hit show: brilliant performances, awesome zingers, twisty subplots, and an ensemble cast with no weak link. And let’s face it, the accents don’t hurt either.

The brain-child of Saturday Night Live creator Lorne Michaels, Portlandia pokes fun at, you guessed it, Portland, and its hipster culture. Starring Fred Armisen from SNL and the very funny Carrie Brownstein, the show features a series of sketches with the two actors playing various characters (sound familiar?). Expect plenty of cameos from familiar faces. It’s a little ridiculously over-the-top at times, but I find myself laughing more than not, which is why it’s on my must-watch list.

While getting a full hour of Peter Krause is definitely a benefit (6 Feet Under, anyone?), there’s much more to Parenthood than just him. The story of one family and the everyday goings on of their own families is probably one of the best family dramas I’ve seen in a very long time. I love how realistic all the relationships are represented, without snark or sarcasm–rather with love, respect, and a bit of humor too. Even though the situations aren’t always “ra-ra,” I always end up feeling warm and fuzzy after an hour with this strong ensemble cast.

So, what are your favorite must-watch television series? We’ve heard lots of votes for Friday Night Lights and The Good Wife…