Going to camp with Apple 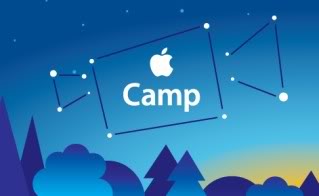 Though my kids generally loathe being dragged along from store to store when I have errands to run, there is one store I have no problem getting them into: The Apple Store. In fact, I usually have to drag them out when I’m ready to leave.

So when I read that they could possible attend summer camp there? Whoa, I know they’ll love this.

Though full details for this summer haven’t been posted yet, Apple Camp sounds super cool for aspiring filmmakers, or kids who just love tinkering around on your laptop. (note: Signups have begun!)

Held at Apple retail stores over three days, Apple Camp is for kids ages 8-12 who want to learn all about iMovie. Kids will create their own iMovie masterpiece which is then shared at the Apple Camp Film Festival at the close of camp. One other bonus? As soon as they are finished, I expect my kids to teach me everything they know.

Other than the fact that your kids will walk away from camp asking for a MacBook Air for Christmas, Apple Camp is totally free.

Sign up here for 2012. And read CC Chapman’s great review of Apple Camp from last year.