Wallit: A new app that lets you join in conversations around the world 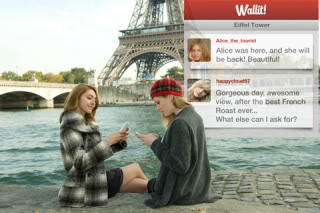 You write on your sister’s Facebook wall. You check in with Foursquare. You leave a note for your friend with Pinwheel. There are lots of apps out there that let you leave your mark on a place whether with photos, messages or video.
But this just-released app called Wallit does just that with a twist, writing on the walls of places in cities all around the world–from the Golden Gate bridge, to the Washington monument, to the Apple Store on Staten Island, to the Eiffel Tower.

Not only can you leave text, videos and photos, Wallit also lets you
leave augmented-reality-style photos–something that sets them apart
from all the other “social wall”-type apps out there.

The other interesting thing about Wallit is that in order to write on a location’s wall, you have to physically be there.
You can’t write on the wall at Penn Station unless you’re actually
standing in Penn Station. Then you can check in, interact and start
conversation with other people who are there too.
(Consider it for the next time you plan to stand in line at your Apple Store for a new iPad.)

More “walls” are being added as the
app grows and more users begin to interact with it. (You can even
request to have a new wall added to the app. And while you can’t write
on walls where you’re not physically present, the app will let you read
the walls of places within a 100 mile radius of your location–and anywhere in the world with the next upgrade.

Not sure how useful this is, but there’s something cool about seeing what’s happening at Leaning Tower
of Pisa or Miami Beach during Spring Break (well, maybe forget about
that last one…) or even down at Wall Street during say, an occupy movement? All from the comfort of your own current location.-Molly

The Wallit app is a free app available for iPhone in the iTunes store. (An Android version is coming soon!)

Molly Balint is a tech and parenting writer at Babycenter, and a former Cool Mom Picks and Cool Mom Tech contributor.
Bio
Twitter