Matching with Friends. You want it. 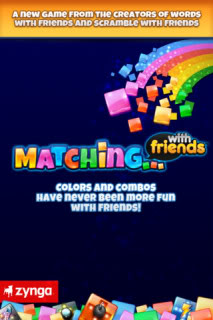 I am really into Words with Friends. “Into” is an understatement. And I know Liz is really into Scramble with Friends (though rumor has it no one will play her anymore; she’s some kind of Scramble savant.) So when Zynga announced a new game with a similar theme, I was excited to see if it could hold its own to my beloved WWF.

Great news — it is equally addictive and fun.

Can you recall the days of Tetris on the world’s
first Game Boy? Remember when you would play that game all day long, and
then when you closed your eyes to go to sleep you literally saw colored
bricks flash before your eyes? Matching with friends takes that old
school Tetris fun and adds competition, and another dimension.

There are Minesweeper-like
bombs and extra points to be had in a Connect Four kinda way. Plus, you
are playing in real time with your friends. So, there is the added
confusion of trying to maneuver your way through several games
simultaneously.

Move quick! Matching With Friends is currently free at the app store and coming soon to Google Play for the Android.