Kids and cell phones? Kajeet can put you both at ease 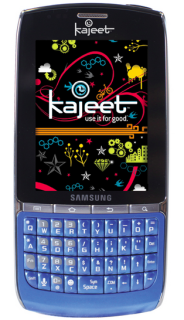 Kids and cell phones is a combo that strikes fear into even the most laid-back parents. As my oldest daughter inches closer to cell phone age, I’ve decided to do my research early so I’m ready when she’s ready. And while it’s tough to know what age a child should get a cell phone, the one thing I know is that you want a phone system like Kajeet that’s made just to keep kids safe.

Our Editor-in-Chief Liz described Kajeet as a “cell phone with training wheels” on her recent TODAY Show appearance and she’s exactly right. It’s the perfect way to teach your tween or teen cell phone responsibility, thanks to their smart, parent-friendly features. For example, you can set texting limits, limit the time the phone is able to make and receive calls or texts, or even allow only a limited, pre-approved list of numbers to get through.

SAFETY CONTROLS
I think their TimeManager feature is brilliant, allowing you turn off your kid’s phone at certain hours, like during school or after bedtime. You can even monitor the websites kids visit if you happen to choose the smart phone option. It’s nice to know the phones are from reliable brands like LG, Samsung, Kyocera and Nokia too.

GPS LOCATION SERVICES
The $24.99 plan adds in a GPS tracking service, which can help you keep dibs on her for safety reasons–say she commutes a long way to school, or she’s often on the road with a varsity team. We’d just suggest you use tracking judiciously, especially if you have a trustworthy older kid. For younger kids, however, just starting to go off on their own? It can really create some peace of mind. Especially since you can set up automatic alerts to let you know when they’ve arrived at a specific location.

PRICING
The phones themselves start around $35 for the lowest end LG 102, and up to $170 for an Android smart phone. I’d imagine most of you will find the right specs somewhere in the middle.The very basic plan starts at just $4.99/month, but only take that one if you have a younger kid who will not be using the phone much because you’ll pay for every text and call. A $14.99 plan gets you unlimited texting, and if you go all the way up to $50 for an older teen, you’ll get unlimited everything, including voice minutes.

The best part: No contracts at all.

I can’t think of a better, safer way to start your kids off on a cell phone that will ease everyone’s mind–and ensure that you won’t be paying a $600 texting bill at the end of the month. I’m not even exaggerating. -Kristen

Peruse the Kajeet cell phones for kids and their various service plans on their website.