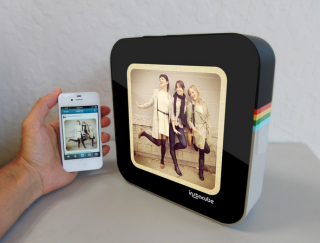 The photos I see on Instagram are many things: evocative, funny, sweet, and sometimes just plain cool.

But they are also really small.

Which is why I’m digging a successful Kickstarter campaign that will make it so easy to get to enjoy those Instagram photos on the big(ger) screen.

Instacube is quite simply a cute little display cube for your Instagram feed. It reminds me of the digital frame we bought the cross-country grandparents when my oldest was born, though way less fussy to use, with no phone lines to connect to for “photo downloading.” You just log into your Instagram account on the Instacube, and it will grab your feed through your wireless network.
The Instacube would also be a great gift for a
traveling or military parents who can glance over to their bedside table
and see shots from home. Since it will also run Android, my
husband’s feed can run along with mine regardless of the type of phone
we have.
Like your feed, Instacube updates automatically, so I can look over and see what photos my friends have just uploaded. I like that I can also specify it display photos with a certain hashtag which would be nice around #Christmas or if we want to get excited about an upcoming trip to #WashingtonDC.

Provided that the people you follow are uh…kid-friendly with their photography. –Christina

Instacube has been fully funded on Kickstarter and is slated to launch in the first half of 2013. If additional funding goals are reached, they will “unlock” the development of a black and a white Instacube frame. Neat!  Ed to add: This goal was met, so black and white cubes will be created! Now, the newest goal states that if they make it to $500,000 in the next 12 days, they’ll integrate Facebook photos to the cube as well!