An easy way to share photos privately. Did we mention privately? 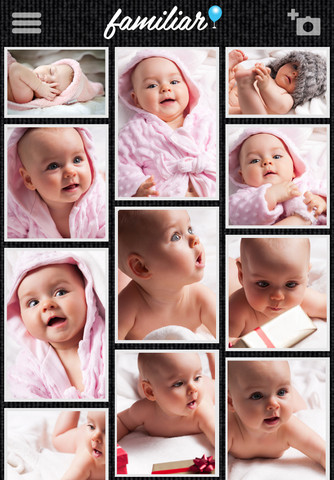 I’m not big on sharing kid photos on Facebook–I find my privacy settings magically change too often–but I’m also not great at queueing photos in emails to send to family and friends, either. This results in irritated people who are tired of asking me to send new kid photos, yet again.
So give me an app that automatically beams pics straight to my family’s phones, and I’m sold. An app like this one, for example.

Familiar is a free app that lets you do just that. Simply create an account, choose the place where you keep most of your pics (like Facebook, Instagram, Picasa–or even the photo album on your phone or tablet), select the contacts you’d like to have your photos, and that’s it.

The app pushes the photos to your friends via their own iPhone, iPad, Kindle Fire and Android (or their home PC, if smartphones aren’t their cup of tea), turning their screens into digital picture frames. And if you ever want to share an album with all of Facebook, for example, it’s easy to make public–it just takes the tap of a button.
Just be sure ask your contacts if they want to be part of the system before you list them as contacts. The app emails them automatically and my family was confused by what the heck I was sending them.
Still, if you’ve got devoted grandparents who can’t get enough of those baby pics, the app ultimately means it’s super-easy to give them their kid fix–and for you to give it to them. –Lexi
Get the Familiar app at the iTunes store for iPhone and iPad or Google Play for Android