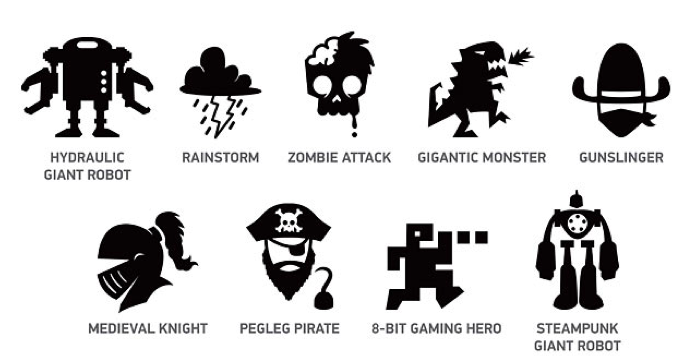 Every year, there is one kid who comes to the door in the most unbelievable Halloween costume, one that I know either took a month to make by hand, or cost a small fortune to purchase.
But, I’m pretty sure that with this one little device, you could be the talk of the neighborhood no matter what you are wearing.

Mega Stomp Panic is a simple clip-on, motion-activated device that brings sound effects to your Halloween costume….and it is hilariously awesome.

Since buying it, I can’t decide if I like stomping around the house to the metallic sounds of a steampunk robot, staggering after my kids for br-aiiiiiiiins, or quick-stepping like a character in a video game while the little beeps follow my movements.

Turn on the two-part device that clips to your waistband and hear some ambient “background noise”, like ocean-and-seagull sounds for the pirate. But, take a step, then watch everyone around you go bananas. Stomp, jump, or move really quickly, and the sensor will trigger a “special sound,” like a big splash in the rainstorm setting. There are nine different sound banks from which to choose, so no need to stay committed to the medieval knight for the entire evening.

One warning: Your kids will play with this for hours when it first arrives, so it may be better to wait until they can go outside and annoy, I mean entertain, the neighbors. Though, at almost $40, I’m not sure I entire trust my youngest with it—he’ll probably have every toddler crying as he wanders the neighborhood as a giant monster.
This is probably a better costume accessory for grown-ups or older kids who know when to turn it down–or off. Though I’ll have to keep it away from my husband because I’m fairly sure he’ll use it to chase the teenagers down the street in “zombie” mode. –Christina
Mega Stomp Panic is available at Think Geek in limited quantities. Also, don’t miss the entertaining video on their site of it in action.