The Samsung Galaxy Camera: The reinvention of the camera in an internet age 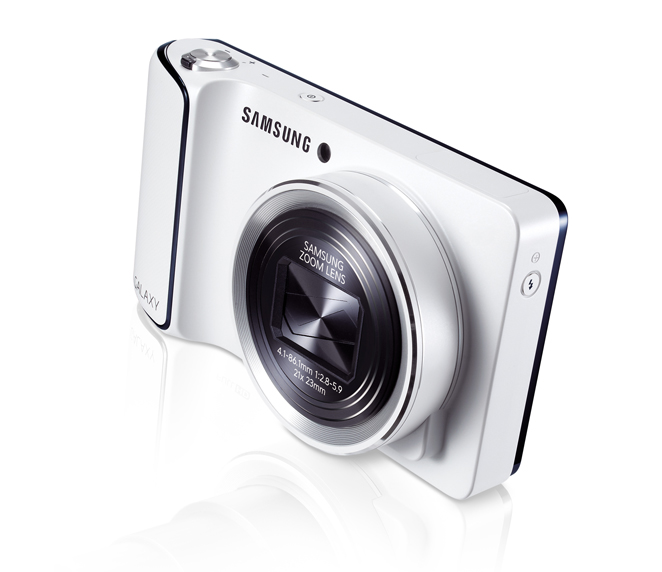 Like so many parents, I have pretty much relied on my iPhone for taking pictures for the last few years. While the convenience is great, there are definitely times when I want to revert to the quality of my previous digital SLR camera, but don’t want to deal with the bulk. I’ve found a remarkably happy medium with the brand new Samsung Galaxy camera which is nothing like you’ve ever seen.

While tablets and smartphones offer tons
of bells and whistles that include standard camera options, the Samsung
Galaxy is a camera first and foremost, but with the Android Jelly Bean operating system installed, it also offers the convenience
of a smartphone–without the calling features, of course.
After
pulling the device out of the box, I realized how accustomed I had
gotten to the slim iPhone. This camera is definitely bigger (hello, it is a camera) and not something meant to easily slip in my pocket, but it’s easy to forget at first. Looking at the huge, nearly 5″  touchscreen on the back with
all the app icons makes you realize what an amazing hybrid innovation this is.

When
it comes to taking pictures, all of the controls are located on the
touchscreen (with the exception of the flash, zoom and power). Speaking
of zoom, the Samsung Galaxy Camera gets way closer than any smartphone camera, which has always been one of their biggest limitations. Lots of parents will find this handy when stuck in the last row of the school play.

Of course the big
lens in the front is the obvious giveaway that it’s a camera and not a smart phone or mini tablet–and also why the results are so good.

As with any camera, you can shoot auto or manual, plus there’s also a Smart mode option with the standard pre-sets, including a super cool one called Best Face which selects the best faces for
each person in a series of consecutive pictures and puts them into one
single picture. I can see that coming in handy for holiday photos when I end up taking about a thousand anyway. And of
course, there are in-camera editing options to help you fix
things red-eye, color, saturation, basically anything you’d use a
separate photo editing app to correct.

Another
cool thing? Instead of depressing the shutter to take a picture, you can
also speak to it and say “shoot” to get it to take the shot. Voice-controlled
camera taking? Wow! And it also shoots HD video as well.
But what really makes this camera so innovative is
that it connects via 3G/4G and Wi-Fi networks. So, you have the image
quality of a 16 megapixel camera plus the convenience of being able to
share your professional-looking pictures instantly. No more downloads or
wires–not even a wireless memory card is needed.
Since it runs Android and connects to Google Play, you can
download apps for web browsing, connect to all your favorite social networks, and save photo
apps like Instagram and Flickr. And if you have a Samsung Galaxy
tablet or a Samsung laptop, there are apps that let you automatically
push all your images directly to your devices, kind of like iCloud does for Mac users.

All in all, this really is a great camera, has tons of options and let’s face it, just looks
really cool. But–and here’s the but–it’s not cheap as you might expect. The camera itself
is $499, which is comparable to other high-quality hybrid digital cameras with long zooms, and a little less than an entry-level DSLR. But
if you want to take advantage of the smartphone qualities and have that
always-on connectivity to share those Annie Lebowitz shots with your
friends and family, you’ll also need an AT&T data plan,
which starts at about $10/month for this camera. Fortunately, the plan includes 5 GB of free storage in AT&T Locker, a
photo/video sharing and cloud-based storage.
For shutterbugs out
there who are missing the quality that their big old SLRs used to
offer, but who rely on the convenience and connectivity of their slim
smartphones, this is a pretty awesome compromise.

I think I can safely say that the Samsung Galaxy Camera has just completely reinvented the camera. –Jeana

The Samsung Galaxy camera is available online for $499 from the AT&T Wireless Store. Thanks to them for providing one for review.