Piquing Our Geek: The 3Doodler 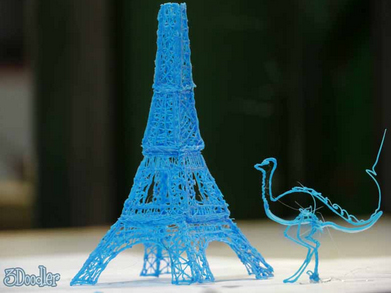 With a crew of budding artists in my home, I’ve often thought about investing in a 3D printer so I could turn their drawings into sculptures. But now with these new amazing gadget, doodles can become a piece of art all at the same time.

Meet the 3Doodler, a fascinating gadget that’s exciting so many people their Kickstarter campaign goal has been met in epic proportions, and for good reason; it’s the first 3D printing pen.

As you draw, the 3Doodler exudes plastic which is then formed into a structure. Of course, if I used it, I imagine it would look like a big ball of yarn, but in the hands of artists, well, look at the creations.

Now it’s not made for young children because in order for the plastic to leave the pen, it needs to be hot, but artistic tweens or teens? Absolutely. And for you artists, what an amazing tool. -Kristen

You can get more information about the 3Doodler on their website, or fund their Kickstarter campaign.