The Wahoo Swim Monitor: A high tech solution to keep kids safe in the water 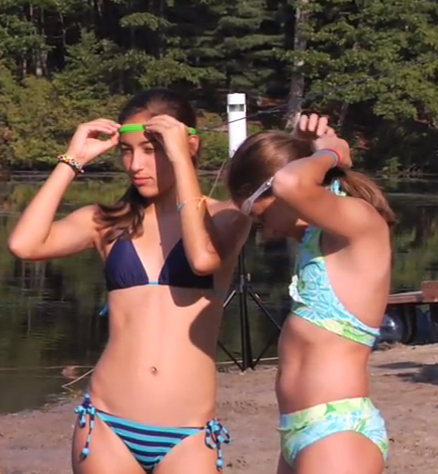 Now that we’re fully immersed in swim season, as parents we’ve always got safety on the brain. Recently we discovered The SEAL System, a really clever gadget and companion app to help you monitor your kids in the water. Now, there’s another inventive option to help keep kids safe and it’s as simple as a headband.

Well, a headband plus a hugely comprehensive technology system.

The Wahoo Swim Monitor was invented by three fathers in response to a tragic drowning incident that they hoped would never be repeated. Wahoo works with a simple swimband worn around your kid’s head, kind of like goggles. In fact, you can attach goggles to them too.

And they’re actually kind of cute, with bright colors, so kids won’t feel dorky wearing one. Which we all know is key.

Sensors in the band determine if it’s submerged underwater longer than 20 seconds, which then triggers warning lights in devices that are posted along the waterfront. It flashes yellow, followed by red lights and a loud siren if it hits 30 seconds. There’s even a locator device to help a lifeguard find the swimmer quickly, and all the data is logged through a central system and onto a control tablet for later analysis.

As opposed to the SEAL system, which individual families might be interested in, this is a big investment designed more for swim classes, community pools, day camps and beaches. I’d think this could give lifeguards a huge head start, especially in crowded swim areas, or murkier lakes.

Score one for technology. And smart parents figuring out great ways to put it to use. –Liz

Learn more about the The Wahoo Swim Monitor on their website and see if it’s right for your camp or community. There’s a good demo video here. Be aware though there are some videos on the site that you might not want to watch with kids around.