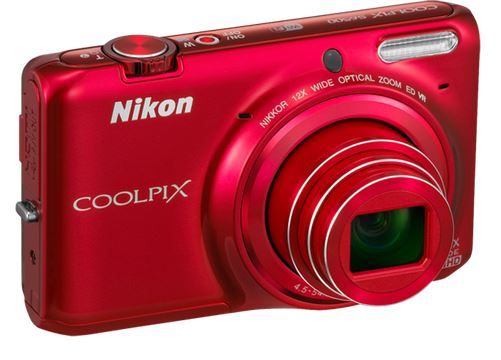 My first child’s photos were taken with an earlier version iPhone and I’ve decided that I need to start taking better quality ones moving forward. I don’t want to lug around a huge DSLR or end up with a point-and-click that takes forever to focus, open, etc. Can you recommend a Wi-Fi compact camera that’s less than $400? – Liza

Hi, Liza. Great question. You didn’t specify which iPhone model you have, but yes, it’s true that every progressive version has boasted an even better camera. As a former photographer myself, I do use my iPhone 5 camera for the majority of kid pictures I take and am very pleased with the quality. That said, if you don’t plan on upgrading your phone anytime soon, there are a handful of great Wi-Fi compact cameras to consider. –Jeana

We got a glimpse of this Nikon (above) at CES 2013 this past January and immediately added it to our list of cameras to recommend. With 16MP, a 12x optical zoom and a shutter feature that lets you take seven continuous shots in one second, you’ll be able to capture every moment, even from across the soccer field. This model doesn’t offer bonus features like in-camera editing and touchscreen capability like pricier models, but for the price, it’s an affordable Wi-Fi compact that takes great shots. ($169)

This is another camera that impressed us at CES. Obviously, the built-in Wi-Fi is a great added feature for immediate access to your social networks and being able to share those adorable kid pictures right away. There is a touchscreen element on the screen that makes using it feel very familiar, not to mention, the photo filters that are pre-loaded to give it that Instagram-y feel. Most importantly, its 12 MP/1080p video will certainly create high-quality images and clips that are worth sharing with those you love. ($299)

If rugged is what you’re looking for, then look no further than the Panasonic Lumix TS5. Not only is this Wi-Fi compact waterproof, it’s also shockproof, dustproof and freezeproof, making it no match for whatever kids throw at it. In addition to those huge benefits, the Lumix offers 16MP and a 9.3x zoom lens, HD video, panoramic shooting, editing controls and more, making it comparable to other similarly-priced models on the market. But its major selling point is that it’s virtually indestructible–very nice when you’re around kids all the time. ($350)

You mentioned your $400 limit, but consider the Samsung Galaxy Camera which comes in just over your budget at $449. Way more than just a point and shoot, the Samsung Galaxy offers everything from a 16MP camera, a 21x super long optical zoom, a wide angle lens, photo editing tools, and every other feature you’d expect from a high-end digital camera.

Plus, since it offers Wi-Fi and 3G/4G connectivity, it’s more reminiscent of a smartphone (without the calling features), offering a load of Samsung apps, like Instagram and Flickr, even allowing you to instantly share your images to other Samsung devices, if you have any. And it even recognizes voice commands, which makes taking those spontaneous pictures a snap. Just keep in mind that this phone requires a data plan, which will cost an additional $10/month.