The return of Bill Nye. To the web. Yes! 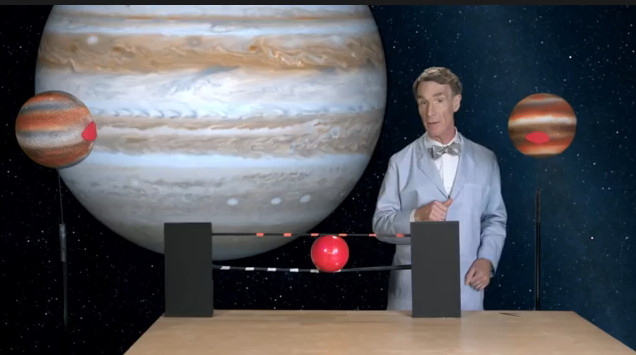 Without exaggerating, there’s probably hundreds of things I wish were around when my kids were younger, and Bill Nye’s old show is definitely on that list. We’ve made do with science programs geared toward adults (yay Morgan Freeman!), but I’m really excited that the original Science Guy is back with a cool new web series for kids.

NASA’s spacecraft Juno is en route to Jupiter, and the web series Why With Nye is all about why we’re headed there, and what we hope to discover about Jupiter while Juno is in orbit around our largest planet.

My kids were thrilled to learn that our space program is still going strong, exploring the solar system to learn more about how Earth and the other planets were formed. They were also fascinated by the spacecraft itself and the journey it will take–Jupiter is a long way away, and there’s a bunch of obstacles in the way, like asteroids and radiation belts. Bill Nye also describes how NASA plans to learn about Jupiter without ever even landing on its surface.

Considering the duration of this mission (Juno will begin orbiting Jupiter in July 2016), I’m hoping that means Why With Nye will be around for a while. Such a cool way to keep our kids excited about science. -Julie

Watch Bill Nye’s Why With Nye web series on YouTube