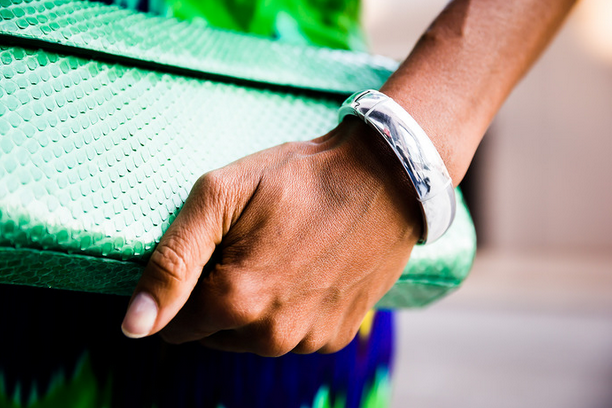 If you’ve ever missed a call because your cell phone was hidden in the deep recesses of your purse, then you’ll want to get your hands on these two smart gadgets. Like, yesterday.

While there are plenty of times that I’ve been glad to have missed calls, there are many more where I really wish I hadn’t. And that’s exactly why I’m digging Trellie and MEMI. (I know, they sound like two long-lost Teletubbies.)

Trellie is a simple, battery-operated bluetooth gadget that attaches to your bag and alerts you of an incoming call–smart considering women don’t tend to stick their phones in their pockets like men do, so we can’t always hear it or feel it vibrate.

Once you pair your iPhone or Android with the little silver (or gold) Trellie, you’ll see slow flashing blue and white LED lights, letting you know someone is calling you. If you miss a call, the lights flash more slowly and will continue until you press a button to turn it off. Super smart, especially for people like me, who sometimes can’t  hear my phone even on the loudest setting when it’s buried under who-knows-what in my handbag.

Though MEMI (also at top) is similar in that it will notify you of incoming calls, it has vastly different features including the fact that it’s a bracelet and not a bag clip.

Instead of lights, MEMI lets you know when calls–as well as texts and calendar events–are coming in with three different buzzes, and only from people you select, like your kids or your spouse. (Maybe not your mother-in-law. Ha.)  Right now, it’s only available for iPhone 4S and up, but here’s hoping they loop in Android users soon, because I could see this one really taking off. Especially because it looks so nice on. Kind of like getting used to wearing a watch again–seeing as how our phones are our new watches anyway.

With either gadgets, I realize that it might seem like yet another thing to keep us connected to our phones all the time. But given that texting is so popular these days, when I get a call (or really, miss it), it’s generally important. And hey, at least I have a choice to ignore the buzz or the light rather than not even knowing my phone is ringing at all. -Kristen

You can purchase Trellie on their website. MEMI is currently in its final hours as a Kickstarter campaign. You can visit their site to support them and help make it happen.