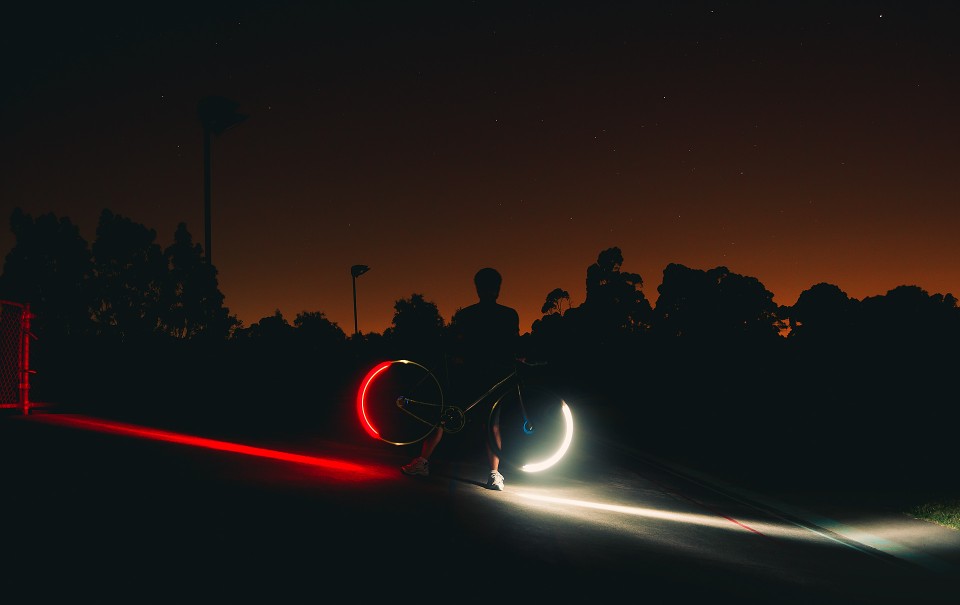 When it comes to safety with our kids, we don’t mess around. And that’s especially true when it comes to bike riding. We’ve found some fantastic bike helmets over the years, but one area that’s been seriously lacking in both safety and cool factor has been bicycle lighting. At least until now. Introducing, Revolights.

Until recently, the best bike lights I could find were small blinkers to attach to the front of my bicycle or hang from my neck. But those aren’t very effective for riders, and as a driver I find the flashing red lights heading my direction to be really disorienting—almost more harm than good.

The front wheel with Revolights however, illuminates in front of you with a white LED light functioning as as a street-legal headlight. The smart technology creates an arc of white light on the sides of your wheel, so the individual beams create an arc of light the faster you go. The back wheel does the same thing, but in red, like a brake light. You’ve got to see these in motion. And once you do, you’ll be as taken with them as I am after trying them out.

The whole thing sounds so simple, but it’s fascinating to watch; my kids had their faces plastered to the window last night as my husband rode up and down the street in the dark. And that’s why this safety feature is going to be really popular and effective—it’s cool. Seriously cool.

The headlight on these wheels is great for a casual ride or even darting around on errands in the city. I wouldn’t recommend it for nighttime triathlon training, but the vision is still pretty impressive. If you’re struggling to fit a bike ride in your busy schedule or you want your kids to be able to ride home from their friend’s house a couple streets over after dusk, this certainly will give you the visibility you want.

The Revolights system can be purchased as a fully assembled set of wheels with the lighting system in place. I let the guys at our local bike shop change out the wheels for me because I wasn’t confident about switching out the gear cassette. (Note: the tires are not included.) Or, you can just buy the Revolight rings and mount them onto your existing wheels. This is a lot cheaper, but more complicated to assemble. If you’re really familiar with bikes, go for it.

One last option is the Arclight bicycle fender, currently a Kickstarter campaign—it’s simply a fender for the back with the red brake light on it. It’s a significantly lower cost than the wheels, so if you’re mainly worried about keeping your kids safe on the streets at dusk, this is a great option.

Order Revolights wheel lights starting at $229 from their website, or find the Arclight fender for $89 via their Kickstarter campaign. Thanks to Revolights for sending us a set of their wheels to test out.