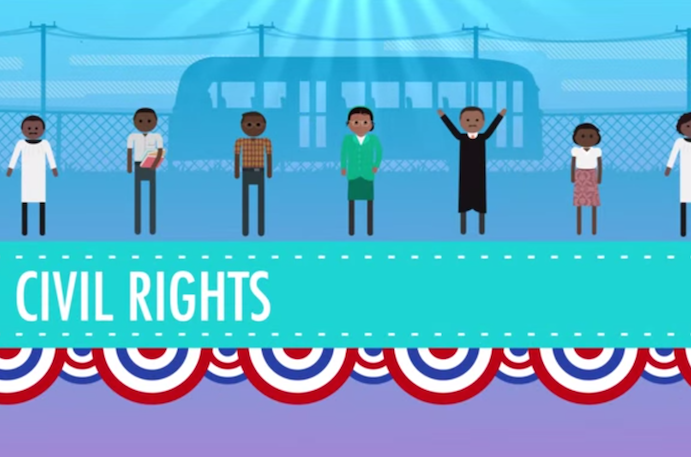 While my NYC school kids are home today in honor of Martin Luther King Jr. Day, I know that sadly, it’s still not recognized nationally the way we recognize, say, the mythology of Columbus Day. (I’ll refrain from going off on that one.) In several southern states, MLK Day is still paired, ironically, with Robert E. Lee’s birthday. And in others, it’s given the alternative name, Civil Rights Day, which at least honors Dr. King’s legacy in spirit.

Whatever your children are being taught about it in school, and however you honor the day, I think today is a great opportunity for parents teach kids of all races and backgrounds, just what Dr. King was all about. So I’m really happy that Christina turned me onto the entertaining, educational Crash Course videos by Subbable. And in particular, their US History videos on YouTube. Because my kids and I are going to be watching them today.

If you check out the Civil Rights and the 1950’s Crash Course video and the 1960s in America Crash Course Video, that’s less than a half-hour total, very well spent.

I love that the 1950’s video really sets the stage for life in America at the time, giving excellent context leading up to the civil rights movement. Author John Green (who produces the series with his brother Hank) is an outstanding narrator, with the expertise and energy of your favorite middle school or high school teacher who finally brought history to life for you.  He doesn’t dive too deep (it is only 12 minutes, after all) but I like that he goes beyond the standard talking points. He addresses the problems with segregation–and subsequently the issues with desegregation. He corrects the myth that Rosa Parks was just a tired old lady on a bus, and not a long-time activist and secretary of the NAACP. He also describes how the bus boycott lead Dr. King to national prominence, and notes the integral role of the Black churches in creating change.

When you’re done with that one, you’ll definitely want to continue on with the 1960’s video, which get more specific about Dr. King’s life, including his arrest, his I Have a Dream speech, his death, and how his actions and the entire movement influenced policy change from Presidents Kennedy and Johnson.

The entire video series comes to life with engaging animations that remind me of CMT favorite Brain Pop, plus photojournalistic images in the spirit of a Ken Burns documentary and interjections from John whose passion for history comes through loud and clear.

Some of the references might be over your grade-schoolers head just a bit, but it’s nothing I can’t watch with my seven-year-old, pause, then give her more info if she needs it. Like what exactly was “the letter from Birmingham Jail.” Or what John means when he says sarcastically, “Thanks, Lee Harvey Oswald. Or maybe not Lee Harvey Oswald. But probably Lee Harvey Oswald.”

And that’s the cool thing about YouTube videos–dictionary.com, Wikipedia, and all of Google is just a single click away.

Just know that there’s a bit of good-natured snark in these videos (“University of Mississippi…America’s fallback college. Sorry, I’m from Alabama.”) which is in part what keeps them so interesting and fun. And there’s not a whole lot of punches pulled; the news photographs depicting police dog attacks, or the remains from 50+ racially motivated bombings in Birmingham definitely require more discussions.

In fact, I think videos like these present an an excellent opportunity to talk about the #BlackLivesMatter conversation (note: Also the American Dialect Society’s word of the year) especially if you haven’t yet; and to discuss the profound racial divide still going on in the US today–ask your kids what they think has changed since the 60’s, and what hasn’t.

I also like that John Green specifies that one of the reasons the civil rights movement is taught so prominently in US classrooms is because, in part, it’s evidence that a citizen movement can successfully lead to legislative change.

And that right there is the reason we need to talk to our kids about social good, human dignity, equality, and speaking truth to power whenever the opportunity presents itself. Because if our kids care, then they’re the ones who will grow up to actually do something about it.

Learn more about the  Crash Course videos by Subbable on their website and how you can support them, and visit YouTube specifically for the Civil Rights and the 1950’s Crash Course video and the 1960s in America Crash Course Video. As with many YouTube videos, you might want to skip the comment sections.