The newest watch-out for parents: Phone numbers posted on Instagram 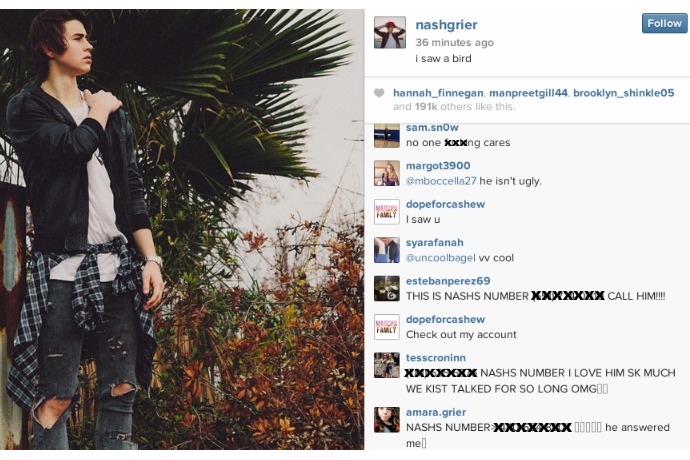 Remember when we had to buy magazines like Tiger Beat to get the scoop on our teen crushes? These days, tweens can get up-to-the-minute details on their favorite Instagram and Vine stars, right on their smartphones. (Niall, Harry, Liam, squeal!) But parents should be aware that with the current trend, some of their fans and followers are doing more than shrieking I love you! in the comments.

The latest: Instagram users post phone numbers in the comments on stars’ accounts, like Nash Grier and Cameron Dallas, and claim that fans can reach Nash and Cameron directly via those numbers.

Think Rob Lowe and Mark-Paul Gosselaar from back in the day, except today’s stars make Vines instead of feature films.

And of course, those are not really the stars’ numbers. Which you probably know; but an unsuspecting young teen might not.

One of parents’ concerns is that their kids’ own mobile numbers could end up in the comments, posted there by a friend as a joke or as part of a bullying tactic. But we think the issue likely to affect more users, is that kids are calling and texting these random numbers, presumably to say hi (hopefully nothing more tawdry than that) to a favorite idol, when really, they’ve got no idea who’s at the other end.

The part to really be aware of: if kids have enabled Share My Location, whomever they’re calling or texting can see where they are and where they’ve been — home, school, sports practice, and anywhere else they bring their phone. Which is pretty much everywhere,  right?

What to do about it

1. Our first recommendation is to check your kids’ location settings, along with a quick review of the restrictions you’ve enabled on their phone. Specifically, we suggest disabling Share My Location. To find it, go to Settings > Privacy > Location Services > Share My Location.

Tweens and younger teens aren’t using GPS for driving directions or tracking their morning jog. And with iOS 8, they can still selectively share their location with you — to confirm that they’ve arrived home or at a friend’s house safely, for example, by doing it directly through iMessage on iOS 8. (Tap Details when you’re in a message thread, and tap on Send My Current Location)

2. Be sure to have the tech talk with your kids and add this in as one of those points to cover. Even if you’ve talked with them before about being safe and smart, talk again. Remind them how important it is to safeguard their personal information, and that even if they don’t share specifically where they are right now or where they live, their smartphone might be sharing that information.

Also, they should be aware that posting private information is against the Instagram TOS. If their own info has been posted they can report it immediately to Instagram.

3. Remind them that not everyone on the Internet or social media is who they report to be. Did someone really just post Taylor Swift’s personal phone number without it being immediately deleted? Unlikely. In other words, if it sounds too good to be true…it probably is.

4. Finally, browse Instagram together. Not only are other Instagram users posting phone numbers that won’t actually put you in touch with Niall Horan, there can be some pretty unsavory drama in the comments. It’s a great opportunity for you to see what your kids are seeing, and to discuss appropriate and respectful online behavior.

And hey, that includes stalker-y comments, links to private Facebook accounts, and inappropriate propositions. As fun as it is to interact with your favorite fans, kids should remember that whatever it is they post or write, is seen by more eyes than their favorite singing star. In fact, he’s not likely to see it at all. (Sorry!)

For more information on online safety, check our archives.