Game Developer Barbie is here, she’s hip, and she actually knows how to code. 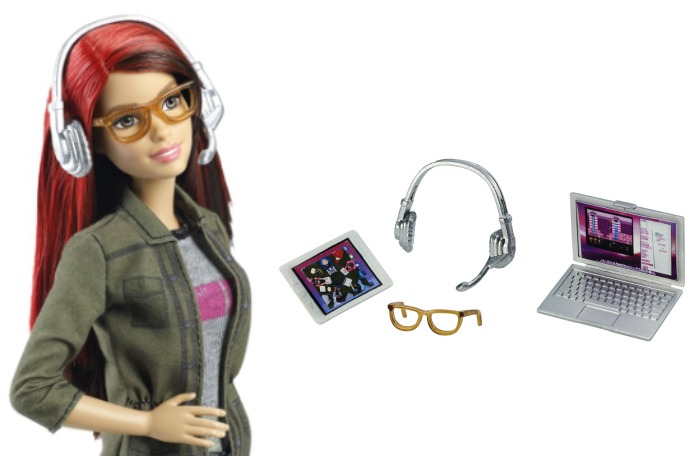 The folks at Mattel have been pretty busy this year, with a new girl power rebranding campaign, a line of curvy Barbies launched with much fanfare, and even a Misty Copeland Barbie that flew off the shelves. Well now, a mere 24 years after Barbie uttered “math class is tough!” and got hammered for it, and 19 months after pulling the Computer Engineering Barbie book in which Barbie was only capable of creating “design ideas” and needed the help of “Steven and Brian” to turn them into real games, silly billy! we’re seeing the launch of the Barbie Careers Game Developer doll.

In other words, from the Barbie Careers line, there is now a Barbie named Teresa, whose goal, like that of so many girls these days (well, at least mine), is to come up with the next Minecraft.

She’s even carrying a laptop with Javascript and actual game code.

They created her thanks in part to a collaboration with Molly Proffitt, a game developer and CEO of Ker-Chunk Games, as well the chair of the Atlanta chapter of the International Game Developers Association. Molly seems to have both style and the developer savvy down, so — great choice, Mattel.

As far as the end result, I admit I’m part thrilled and part cynical. I mean, it’s hard not to laugh when see the air traffic control style headset, then read the description that Game Developer Barbie “looks casually cool in an industry-inspired outfit” and that her “bright red hair and eyeglasses are fashion-forward with techie style!”

(Exclamation point not mine, in fact.)

On the other hand, that’s how you sell dolls. Plus, I showed her to my tween girls who immediately responded, “wow, cool!” (exclamation point theirs) and they do tend to be skeptical of all things Barbie at this age. They really liked the hair and the glasses and the idea overall. Even if they did ask, “so why does her computer have to be all pink and purple and stuff?”

In all, I have to give big props to Mattel for acknowledging that the world is not as it was when Barbie was first born, and giving more little girls the chance to broaden their dreams through creative play.

Also, for giving more college students and grown women the chance to have a Barbie on their desks who represents their own careers, since I imagine that’s mostly who will be buying her.

Now, let’s hope there’s a Game Developer Barbie of color on her way any minute now.

Find Theresa, the Barbie Careers Game Developer doll at the Mattel shop where it is currently sold out, hopefully a sign they’ll be making more like her. Keep an eye out on eBay too, of course, where a $12.99 doll is currently selling as high as $169.99