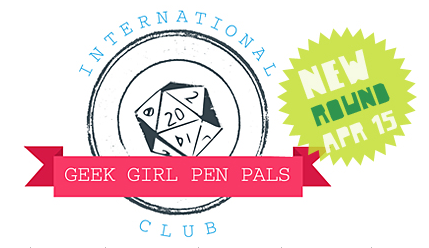 Long ago, the only way to communicate with geeks in a galaxy far, far away was to write a letter, stick a stamp on it, decorate the envelope with unicorns and fairies, and mail it.

But here’s a way for geek teens and girls of all ages to find each other and squee the old fashioned way: on paper. With pressies.

The International Geek Girl Pen Pal Club was founded in 2013 to reinvigorate the lost art of letter writing (even for those digital natives like our own kids) and share geekdom all around the world. It’s already soared to popularity around the web, and I’m not surprised at all.

On the fifteenth of every month, they open up a round of pen pals and match up geek girls (or gents!) according to age and interests. Starting with teens 13 to 17 (House Granger), there are four different age ranges you can sign up in to keep things not-creepy. And they’re smart enough to lump grown-up geek girls like myself into House Organa, which covers everything over age 30.

Each round tends to sign up quickly, so you can follow them on Facebook or Tumblr to make sure you get in. Fill out the form starting on the 15th of next month (set up a text alert, geek moms!), and you’ll receive your match by email sometime between the first and fifteenth of the next month. You can contact your new pen pal by email and communicate in your online way of choice (like friending on Facebook) to make sure you feel comfortable giving out your home address. Then you send each other things! Postcards and letters are fine, although small, geeky gifts under $15 are encouraged.

Things to keep in mind: they try to weed out the crazies, but it is still the internet, so parents might want to stay involved in the process for younger teens. If you have a geek girl under 13, you can always sign up on her behalf and have a pen pal together. And you might get paired with someone international, which can make shipping more of a pain than just licking a stamp–but it can also yield some amazing and eye-opening experiences for a growing geek who’s never received mail from a foreign country.

The first thing I did was try to sign up, but round 3 is already full. I’m following the IGGPPC on Facebook now so I can get in on round 4 when it opens on May 15. Until you get in, they do have forums on the website, also divided by age. Because we geek girls need to stick together. And squee. A little. –Delilah

Find out more about the International Geek Girl Pen Pal Club at their website.