The new Lomo’Instant: The fun of lomography meets the immediate gratification of instant film. 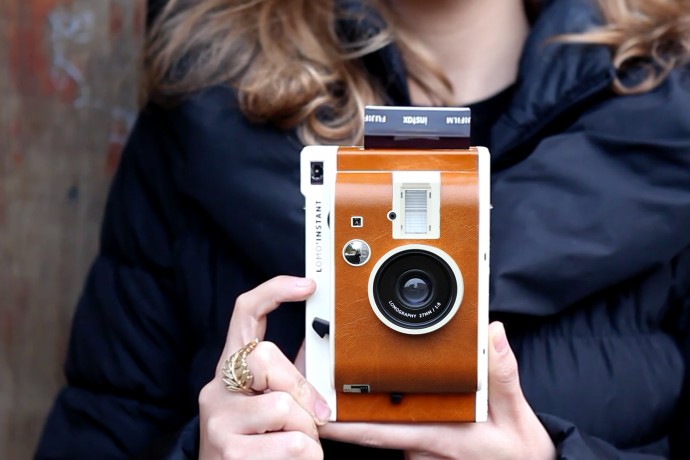 If you want to combine what’s satisfying about manual dSLR shooting, with what’s fun about an instant film experience, then add in the unlimited creativity of lomography, you’ve got the new LOMO’INSTANT which is like my new favorite thing.

This analog camera is just as it sounds, shooting instant film that lets you shake it like a Polaroid (or a Fujifilm Instax Mini), albeit a with way more control than traditional instant film cams.

In addition to its own 27mm equivalent wide-angle lens, which I love, it comes with three additional lenses for portraits, macros, and 170-degree fisheye shots. Screwing the lenses on and off couldn’t be easier, and the camera even has the threads you need for tripods and shutters, if you’re getting fancy and playing with the long nighttime exposure setting or the super fun multiple exposures.

Hand it to your kids and watch them layer three selfies over a stuffed Minecraft pig. Good stuff.

Speaking of which, there’s a convenient little mirror next to the lens on front for self-portraits, as the grownups might still say, and for making sure that you’re actually in them and not just your right shoulder or the top of your head — use the fisheye or the regular wide-angle lens for that and you can get some great stuff.

So, there are a few caveats. This is not like using your iPhone camera or even your dSLR. You have to work a bit at lomography, which is in part what makes it fun. Be sure to check out the Lomo’Instant tips on the microsite, especially regarding how to get the most out of the flash.

The shots you get are arty and a little blue (probably the Fujifilm) and it’s all about playing around, not capturing perfect reality. You do have to adjust your aim up a bit based on what you see in the viewfinder or you cut off heads in close-up shots. And I find that by far you’re going to get the best results when you’re in a well-lit environment and probably backfill with the flash as well.

Backlit subjects can be tough to capture, though you can see from my shots below that they can actually come out kind of cool and contrasty in the macro and the fisheye.

Macros are definitely for experimentation — that’s where popping the included gels into the camera comes in handy. Just don’t lose them like I almost did; they’re teeny.

And definitely be sure to read the manual, and check your settings before each shot — when the slider is on landscape, it’s easy for it to jiggle its way down to portrait.

But when you get the hang of it? Wow. I want to take the next perfect spring day, shirk all responsibilities (you cool with that, Kristen?) and just go out and shoot.

The Lomo’Instant would be a really fun gift for a high school or college grad, and definitely something neat for Mother’s Day or Father’s Day should you have a photographer in the family. But truly, it’s a perfect “fun for parties” camera, allowing you to be the one cool person in the restaurant taking a selfie with something besides the bright, intrusive light of a smartphone screen.

If I have one word of advice, it’s make sure to order extra triple-A batteries and plenty Fujifilm Instax Mini film which comes ten to a pack.

It will take you a good ten shots to figure out the kinds of settings you like. And after that, the second — and third — pack of ten shots goes awfully fast. Especially if your kids get their hands on it.

Get the Lomo’Instant in black or white for $149 with three lenses included, or preorder the gorgeous Lomo’Instant San Remo leather edition for $169. Thanks to Lomo for sending CMT a unit for review.

NOTE ON FILM: The Fujifilm Intstax Mini packs run you $21.90 for a two-pack at the Lomography store which is fine as an add-on if you’re buying it already. However for better prices, we’ve found two-packs (20 pics) for $16.99 at Best Buy with free ship if you spend $35+. It’s $17.50 at our affiliate Amazon with free Prime shipping, and for the best deal, it’s just $38 for a 5-pack bundle. That takes it down to just $.76 a shot which is a big difference.