And a very BetaMaXmas to you too 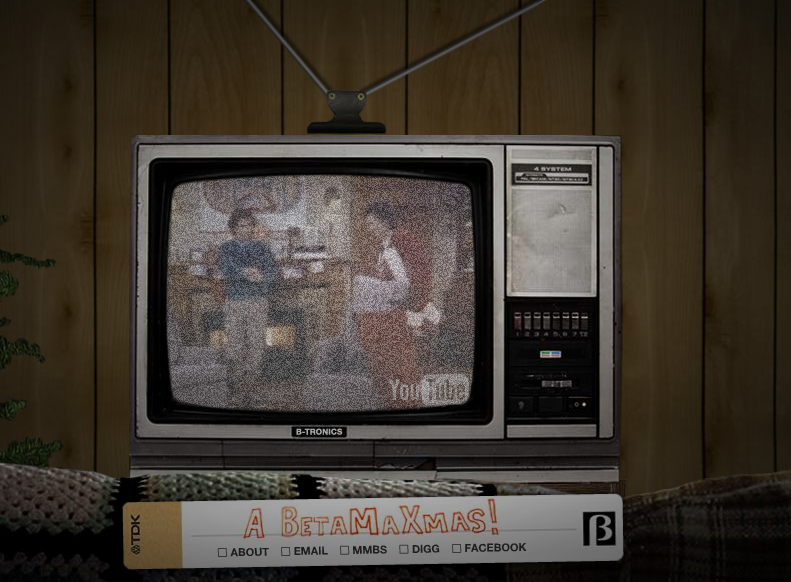 There was once a magical time. A time when children waited in breathless anticipation for their favorite Christmas Special to play on TV. There was no DVR or Video On Demand; no rewinding or fast-forwarding; no YouTube; no bathroom breaks. You had only one shot to watch it, and the commercials were almost as good as the show.

Friends, technology has made those times as dead as the dodo. Or they were. Until now.

Tune into the website BetaMaXmas and introduce your little ones to the wonderful world of a grainy TV with rabbit ears. Just like the TVs we remember, there are only three channels–ONLY THREE– and you can either channel surf with a Hungry Man Meal on your TV tray or check the handy included TV Guide.

So far this morning, we’ve seen a Polaroid commercial fifty times more magical than CGI, as well as Tony Danza dancing with Alyssa Milano on Who’s the Boss? and a sprinkling of Perfect Strangers shown above.

Cousin Balky in a Santa suit? Who can resist!


It’s free, it’s fun, and it brings back the random joy and
excitement of a childhood in the 80’s. The only downside? Just like our
family TV in 1983, there’s no pause button. It’s on or it’s off. And the
volume’s on low so I can sneak peeks without two little people shoving
each other to watch over my shoulder, because they think it’s as magical
as I do.

And now, if you’ll excuse me, I’ve got a date with the He-Man and She-Ra Christmas Special.~Delilah

Go to BetaMaXmas right now. You won’t regret it. But you don’t have to take my word for it!

[via The Bad Moms Club ]