Got your inbox down to 0? That deserves a badge. 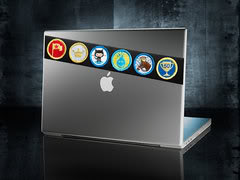 If you like to let your nerd flag fly proudly (says the girl with a Hello Kitty Boba Fett on her car), then you’re going to love these LOLrific Nerd Merit Badges we just found.

Bonus? You don’t have to sell any cookies or build a fire in the rain to get one.

Nerd Merit Badges run the gamut from IT accomplishments to mastery of homonyms. From the Inbox 0 badge (that few can boast) to the Family Tech Support Badge for those of you still telling your parents not to forward those emails about Bill Gates sending you a million dollars, these embroidered, velcro-backed, scout-style badges will add an air of mystery and undeniable nerd cool to your laptop.

The site recommends wearing them on your jacket or backpack, but we’re guessing you’re too geek chic for that sort of thing. Go for the sash on your laptop so it can pretend it won a nerd pageant.

Even if you’re not the biggest geek on the Cool Mom block, you’ve probably earned the Rubber Duck Badge. To find out what that means and see which badges apply to your L337 skills, see the hilarious site. -Delilah

If you’re not a n00b, check out the Nerd Merit Badges.