Piquing our Geek: The Cosmonaut is ready for take off 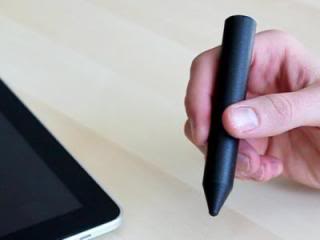 Now that I’m about to get my hands on a shiny new iPad2 (yay!) I’ve been on the lookout for cool new accessories for my tablet, like the PadPivot that I saw on crowd-funding site Kickstarter a little while back.

Now Kickstarter has introduced me to yet another to-be-funded project that I’d love to get my hands on, quite literally. This one looks like nothing more than a chunky black crayon but don’t be fooled by its simple design–it makes total sense.

Since writing on a touch-screen feels more like writing on a dry-erase board and not a pad of paper, NYC designers Tom Gerhardt and Dan Provost of Studio Neat! created the Cosmonaut wide-grip stylus to feel more like a dry-erase marker. Since I won’t be designing clothing or doing architecture work on my iPad, I like the idea of its low-fidelity, smooth-writing feel.

And while I probably would have lived a long and happy life making due with a pen-shaped stylus, I know my kids’ little hands will find the Cosmonaut much more comfortable for them to use while they play all those super-educational, learning games. Or, while “making” cupcakes (sigh).

I only wish there was an easy way to attach the Cosmonaut stylus to my iPad–I have a feeling it’ll get tossed into my cluttered handbag when not in use. Or, if the kids have used it last, I’ll have to fish through their crayon box for it. –Christina

Check out the Cosmonaut stylus on Kickstarter and, for the next few hours, you can support the project too. Rest assured that with over 5,600 supporters, this is one project that is sure to come to market soon.