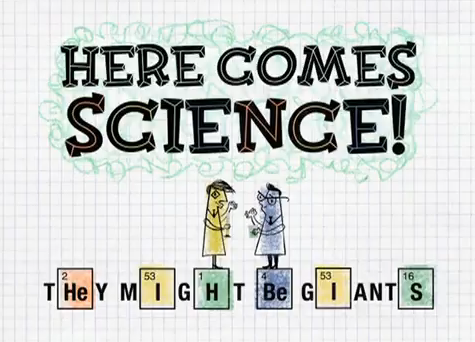 Raise your hand if Schoolhouse Rock is the reason you know the definition of a noun, and the preamble to the constitution. (Me!) I’m eagerly awaiting the day that one of the networks picks up the brilliant They Might Be Giants Video and runs them between shows, but until then, you can snag some fun, free infotainment for the kids on their YouTube Channel.

My kids have been listening to the entire They Might Be Giants collection since they were too young to get the lyrics; now that they’re a little older, they’re absolutely obsessed with the videos. The They Might Be Giants You Tube Channel Channel, cleverly called ParticleMen (a reference to a popular early “grown-up” song) is packed with phenomenal, catchy videos to teach kids about language, numbers, and science, all culled from their wonderful DVD collections.

For preschoolers, I’m partial to LMNO, which reminds little kids that those are actually four letters and not one, while Letter/Not a Letter is a fun exercise in identifying symbols and letters. Alphabet of Nations is a great intro to the world (“Algeria, Bulgaria, Cambodia, Dominica…”) and kindergarteners learning vowels will get a kick out of Vowels are Important Letters–which definitely will be stuck in your head for a good long while.

The science videos are great for older kids learning concepts like Speed and Velocity, Cells, Paleontology, or the light spectrum, here brought to life by a magical elf named–what else–Roy G. Biv. I so appreciate that they never talk down to kids, or dumb down the humor or animation. Think science jokes, not fart jokes. No wonder kids can’t get enough of them.

The numbers videos as a whole incorporate less overt “lessons.” Certainly a few are helpful like I Can Add, and  I Never Go To Work which teaches the 7 days of the week with some of the most awesome animation anywhere. However most of the lot are simply catchy songs that incorporate numbers in clever ways, like Pirate Girls Nine and the really wonderful 813 Mile Car Trip (“One spilled cup of orange juice, 19 pit stops…”).

I love the brilliant animation from a variety of talented directors, the wonderful tunes, and the fact that C is for Conifer and not “cat.” But best, I love snuggling up with the kids on a Saturday morning, clicking on these videos, and helping them learn stuff. It’s kind of like what I did as a kid with my parents. Except for the whole clicking part. –Liz

Catch the They Might Be Giants free videos on the ParticleMen YouTube Channel. Even better, support the band by owning the music! Download the albums from iTunes, including Here Comes the ABCs.  Here Come the 123s, and Here Comes Science which comes with video too.