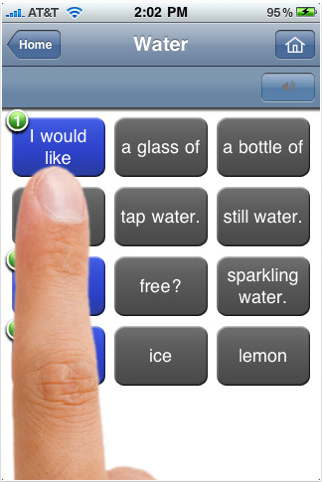 Having just returned from two weeks in Spain with my family, I can assure you traveling internationally with a couple of kids can truly be a joy. (Fear not the plane ride!) But then, there are times it was also a little stressful, what with me having studied French instead of Spanish and the kids starving, and nothing on the menu looking familiar.

Thankfully I found a few language translation apps that I found to be incredibly helpful along the way.

By many accounts this is the best of the free language translation apps and I was pretty darn happy with it. It quickly translates any word or phrase that you type in, into any of 50 languages from Afrikaans to Yiddish, and then back again.

It uses Bing and Google translation (you can toggle between them if one isn’t working for you) so it’s pretty accurate. There’s also the ability to connect with social media, should you want to Tweet your request for “pasta, butter only for my daughter.” The one caveat: You have to be online for it to work, and those data roaming charges ain’t cheap. So I guess it’s not totally free. But it is terrific.

And it seriously saved me when I found myself in the lobby of a Spanish prison attempting to ask directions in broken Galician Spanish. Long story.

Related: Smart travel apps to help you save money

iSpeak is a whole lot like Interpret–even the screen shots are nearly identical–but iSpeak has the added ability to let you speak the phrase you want to translate and hear it back. So conceivably, the waiter could say the special of the day right into the phone and you could figure out that maybe tripe isn’t the right choice for dinner tonight.

When it works, it works very well, but it doesn’t always get your words right. My understanding is that it learns your voice as it goes, so if you stick with your own voice, it should improve. 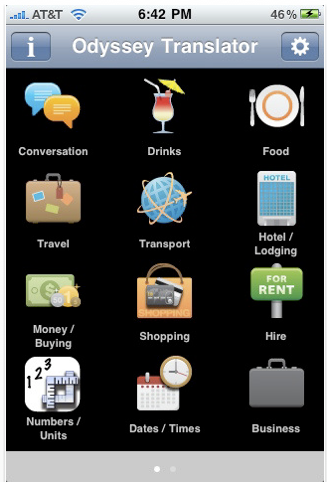 My mom came equipped with the Odyssey Pro (also shown at top) on her iPad and iPhone, and it’s pretty nifty, allowing you to construct a number of helpful phrases, one piece at a time. So for example, you choose from categories like conversation, food, or shopping; it then lets you piece together common phrases with choices like I want/ I have / I need/ I am looking for… and then go onto fill out the sentence. When you’re done, it actually speaks the phrase for you, so there’s no fear of asking for glue, when what you really want is gum. Best of all, it works offline too. My mom was hooked.

My one bit of advice for all translation apps: skip the free versions of well-rated apps when you’re traveling abroad. Trust me, you’re going to want all the words you can get. De nada.  –Liz