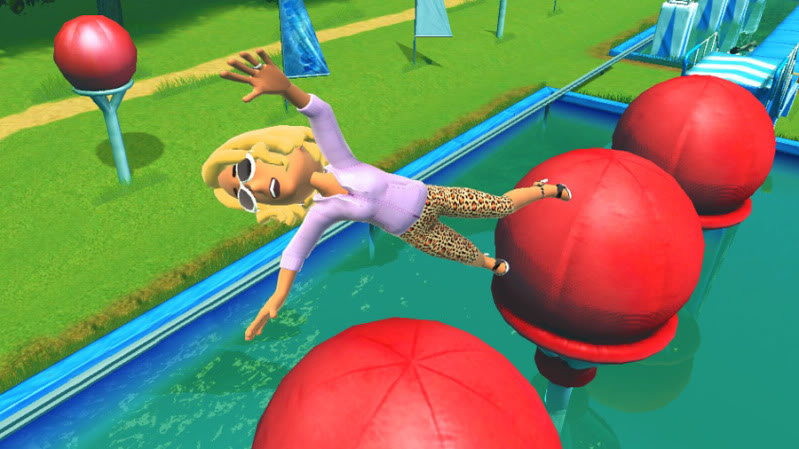 Around our place, slapstick will always have a happy home. We fondly refer to America’s Funniest Videos as The Bonk Show (because of all the people who get bonked, of course) and when Wipeout first aired, we started calling it the Super Bonk Show.

My girls’ great ambition in life is to be on it some day, and now they kind of can, with the new Kinect game for XBox 360.

When I first spotted Activision’s Wipeout In The Zone for XBox Kinect as a demo in our local Best Buy, I knew I had to buy it immediately. This party game lets up to four players run, leap, crouch, and jump over obstacles, then get bonked right back into the water, complete with victory dance opportunities, and smart-alecky remarks from hosts John Anderson, John Henson, and Jill Wagner.

She actually managed to win the first game on the easy setting, and my four year-old didn’t do too terribly — meaning this is one of the Kinect sensor games that recognizes small children better than others. I could use fewer instant replays (lord, there are a lot) but you just have to get in the habit of skipping over them. There’s also a wee bit of lag time with responsiveness, but unless you’re a super competitive family, it doesn’t take away from the fun.

The public humiliation is only a little less than that of the actual Wipeout show, but the exhaustion is pretty much equal; this is work. And yet? Awesome. Especially for kids who can’t stop laughing when their competitors get knocked down unexpectedly. That never gets old –Liz

Find a great price on Activision’s Wipeout in the Zone for Kinect for Xbox 360 at our affiliate Amazon. As with all Kinect games, you must have the Kinect sensor system for this to work.