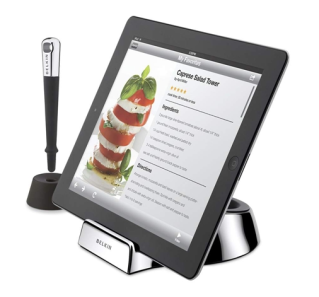 I have to say that the iPad has completely changed the way I cook–no need to take up tons of counter space with my laptop, no fear of drips in the keyboard, and way fewer paper recipes printed. And now with this smart new gadget from Belkin, I’m pretty sure it will take the iPad kitchen experience to a whole new level.

Just launched this week, the Belkin chef stand and stylus was made with messy cooks like me in mind, allowing you to safely prop up your iPad, and then actually use it without having to smudge the heck out of the screen. The sturdy stand has a slip-proof rubber base and even makes room for an iPad case, so you don’t have to strip your iPad down in order to use the stand. And the stylus that’s included ensures that you keep the drips and droplets far away from your precious.

I also like that the stylus stores upright in the circular stand when you’re done, so you don’t have lots of little pieces everywhere.

If you’ve got a serious tech-savvy kitchenista in your house, or you happen to be one yourself, I can’t think of a better gift. And really, it’s much better than having to stick your iPad 2 in a plastic bag or wipe it down with a roll of paper towels after dinner. -Kristen

You can purchase the Belkin Chef Stand + Stylus at Belkin.com. It will arrive in Target stores on October 2nd and at Apple by October 15th.